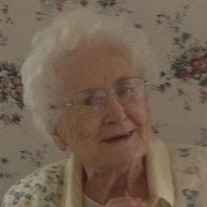 Lleanna Katherine (Matzen) Wright age 88 of Kennard passed away Friday, June 9, 2017 at Methodist Hospital in Omaha. Funeral services will be held Thursday, June 15, 2017 at 10:30 AM at Grace United Methodist Church in Kennard, Ne. Visitation will be held Wednesday June 14, 2017 from 6:00 to 8:00PM at Campbell Aman Funeral Home in Blair. Lleanna Katherine (Matzen) Wright was born on May 21, 1929 in Kennard, NE. The daughter of August and Anna (Hansen) Matzen. Lleanna graduated from Kennard High School. She was married to Sam M. Wright Jr. on February 2, 1947. To this union four children were born; a daughter Sherry and three sons; Sam, Mauri and Monte. Lleanna worked for 30 plus years in food service at Dana College and retired from there. She was a member of Royal Neighbors, the Kennard Legion Auxiliary and the Kennard Fireman’s Auxiliary for many years. Sam and Lleanna were also co-owners of the Dew Drop Inn from 1981-1987. Lleanna enjoyed her life, especially her large family and all the get togethers at “Sam’s Garage” for all occasions. She also enjoyed getting together with all her friends for coffee at the Dew Drop, Family Fare, McDonalds and Carter House almost every week. She had a good heart and always tried to help out her friends whenever she could by picking them up and taking them wherever they needed to go. Lleanna was preceded in death by her parents, her husband Sam, brother Marlin Matzen, and brother and sister-in-law Arnold and Pauline Matzen, a nephew Jeff Matzen and great granddaughter Cecilia Rose McDonald. She is survived by daughter Sherry Anderson of Kennard, sons and daughters in law Sam and Pat of Blair, Mauri and Sherry of Fremont and Monte and Mary of Kennard. She is also survived by 11 grandchildren, 19 great grandchildren, with 1 great granddaughter on the way and 4 great great grandchildren, sister in law Nila Matzen, nieces, nephews and many family and friends. She will be deeply missed by her family and friends, they will miss her smile and laughter and all the stories she shared about her life. Memorials may be directed to the Kennard Fire Department or the organization of the donor’s choice.

The family of Lleanna Wright created this Life Tributes page to make it easy to share your memories.