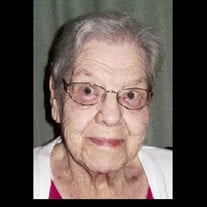 Lillian Sophie Lambrecht, age 103 of Blair, passed away November 5, 2017 at Good Shepherd Lutheran Community in Blair. Funeral services will be held at 10:30 AM Wednesday November 8, 2017 at First Lutheran Church in Blair. Visitation will be held one hour prior to services at the church. Private graveside services will be held in the Blair Cemetery. Lillian was born on August 14, 1914 in Omaha, Nebraska, the daughter of Carl and Mary (Petersen) Dohse. She was raised and attended school in rural Douglas County with her two brothers and two sisters and completed her education in Elkhorn. Lillian began working as a nurse Aid in Omaha and then moved to Chicago and worked domestically for a year and a half. She then moved back to Omaha and married Paul T. Lambrecht on February 14, 1940. Four daughters were born to this union. The family farmed in Washington County and then moved to Blair in 1972, where they were active members at First Lutheran Church and enjoyed their retirement. Lillian is survived by her daughters; Mary (Lyle) Christensen of Bennington, Carole Thompson of Omaha, Paula (Dan) Perchal of Elkhorn, 16 grandchildren, 28 great grandchildren, numerous great-great grandchildren, her sister Eunice Wesemann of Blair, and many nieces and nephews She was preceded in death by her parents, husband Paul, daughter Susan Dunn, son in law Roger Thompson, grandson in law John Housley Jr., brothers and spouses Art (Dora) Dohse, Morris (Agnes) Dohse, sister and spouse Roma (Harry) Weisenberg, and brother in law Herman Wesemann. In lieu of flowers memorials may be directed to Good Shepherd Lutheran Community in Lillian’s name.

The family of Lillian Sophie Lambrecht created this Life Tributes page to make it easy to share your memories.

Send flowers to the Lambrecht family.