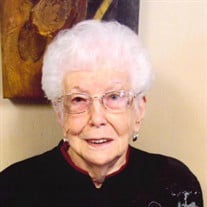 Leu Etta Wulbern of Kennard passed away May 4, 2020 at home. She was born on a farm south of Orum, NE the daughter of Otto and Dora (Wiese) Wrich. After attending grade school at Orum, she graduated from Blair High School in 1945. On March 17, 1946, she was united in marriage to Bill Wulbern. They moved to the family farm north of Kennard where they raised a son and a daughter. She was a farm wife, helping with the farming, raising pigs and many chickens. They peddled eggs for 20 years in Omaha. Leu Etta and Bill loved to go to polka dances with a group of their special friends, having a beer, sharing stories and having fun. Everyone was always welcomed into their home. Leu Etta started selling Avon when she was 50. For 32 years she enjoyed this and even in much later years she would still turn in orders for friends. She won many awards and trips being a good Avon rep., but her biggest rewards were all the dear friends she met during this time. Leu Etta was the sweetest, most caring mother and grandmother who cherished her entire family. She was so proud of all of them. She was a compassionate lady who knew it was the little things in life that were important. She would always lend a hand or make time for everyone. She will live forever in the many hearts of those she touched. Nothing loved is ever lost- and she was loved so much! Leu Etta is survived by her son John Wulbern of Lincoln, daughter Judy (Dan) Schneider of Kennard (where she made her home); grandchildren: Chris Wulbern, Andrea Bullock, Dan (Rose) Schneider Jr., Elliot (June) Schneider, Kelsey (Tricia) Schneider, Derrick (Jennifer) Schneider; and 14 great grandchildren. Leu Etta was preceded in death by her husband of 57 years, Bill, parents, younger brothers: Alvin, Andy and Larry Wrich, and daughter-in-law Mila Wulbern. Due to the current situation with Covid-19, the family is requesting anyone with a memory or story of Leu Etta to please share that with Judy. Phone calls to Judy are welcomed as well as cards; cards may also be mailed to the funeral home. Family graveside services will be held at a later date.

Leu Etta Wulbern of Kennard passed away May 4, 2020 at home. She was born on a farm south of Orum, NE the daughter of Otto and Dora (Wiese) Wrich. After attending grade school at Orum, she graduated from Blair High School in 1945. On March 17,... View Obituary & Service Information

The family of Leu Etta Wulbern created this Life Tributes page to make it easy to share your memories.

Send flowers to the Wulbern family.