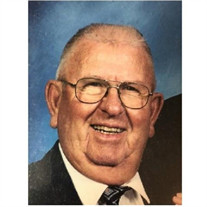 Leroy Allen Rima, 94 of Blair, passed away November 6, 2021. Services will be held Thursday, November 11th with visitation from 2-4 PM with a Celebration of Life at 5:00 PM at Campbell Aman Funeral Home in Blair. Leroy Allen Rima was born February 23, 1927, in Paxton, Nebraska to Agnes Mary (Beekman) and Lloyd Sherman Rima. They lived on a farm between Paxton and Sarben, Nebraska. The family moved to a ranch for a few years, and he rode a horse to school. The family then returned to Paxton before settling in North Platte where Leroy graduated from North Platte High School. Leroy, however, did not attend his graduation as he had enlisted in the U.S. Navy to serve in World War II. He served in the South Pacific on an amphibious landing ship. After being honorably discharged from the Navy in August of 1946 Leroy returned to North Platte. He began work driving truck for Nielsen & Petersen and Union Freight Way before they were bought by Pacific Intermountain Express. Leroy was an over the road truck driver for 37 years until retiring in 1988. In October of 1949 Leroy married Vivian Joy Alberta Snyder in North Platte. From this union seven children were born: Wesley, Dennis, Bruce, Gordon, Kevin, Douglas and Patricia. The family moved to Omaha in 1961 for Leroy’s job. Vivian Joy Rima passed away on April 30, 1970. On August 29, 1972, Leroy married Eleanor Jean Loehr in Omaha. He gained six stepchildren: William, Lori, Ronald, Mark, Keri and Kevin, creating their family of 15. Since retiring, Leroy and Jean spent 31 years as “snowbirds” living six months in Nebraska and Yuma, Arizona. The couple loved going to county music festivals. The last several years were spent close to family in Blair, Nebraska. Leroy is survived by his wife Jean of Blair and his children. Memorials may be directed to Memorial Community Hospital in Blair.

Leroy Allen Rima, 94 of Blair, passed away November 6, 2021. Services will be held Thursday, November 11th with visitation from 2-4 PM with a Celebration of Life at 5:00 PM at Campbell Aman Funeral Home in Blair. Leroy Allen Rima was born February... View Obituary & Service Information

The family of Leroy Allen Rima created this Life Tributes page to make it easy to share your memories.

Send flowers to the Rima family.