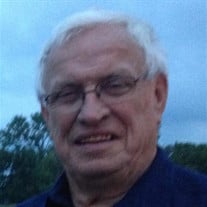 LeRoy A. Lorsch, 75 of Kennard, Nebraska passed away August 1, 2018 at UNMC surrounded by his family. LeRoy was born January 3, 1943, to Arthur and Marjorie (Loftis) Lorsch in Blair. He attended McCarthy Grade School and Blair High School. He worked as a drywaller in Omaha for Tompkins and E&K for a total of 40 years retiring in 2008. After retirement he drove for Woodhouse Ford in Blair until February of this year. In 1964, he was married and to this union had four children; Gene, Tracy, Brandon, and Dana. He later met Sharon Rasmussen and they spent 29 happy years together. LeRoy wore many hats in the Kennard community; mayor, village safety patrol, as well as a member of the Volunteer fire and rescue squads where he was one of the first certified EMTs in Washington County. He was well-known for his joking and teasing nature, being a prankster, driving around Kennard in his golf cart wit his best buddy, Tuffy, and could often be found lounging on his front porch. LeRoy was preceded in death by his companion, Sharon Rasmussen, parents, Arthur and Marjorie Lorsch, sister and brother-in-law, Bonnie and Joe Foster and brother-in-law Duane Dillenburg. He is survived by; son Gene (Vicky) Lorsch of Omaha, daughter, Tracy Bingham (Don Adams) of Blair, son, Brandon (Jill) Lorsch of Kennard, daughter Dana Lorsch of Fremont, stepdaughter, Tammy Kelly, stepson Randy Frye, stepson, Ronnie (Tabitha) Frye, stepdaughter, Peggy (Chris) Snurr, 8 grandchildren, 6 great grandchildren, 11 step-grandchildren and 9 step great grandchildren, brother Arnold (Marietta) Lorsch of Omaha and sister Lila Dillenburg of Blair. Funeral services will be held on Monday August 6 at 10:30 at Grace United Methodist Church in Kennard. Burial will follow services in the Kennard Cemetery. Visitation will be held Sunday August 5 at Campbell Aman Funeral Home in Blair with family receiving friends from 6:00 to 8:00 PM

LeRoy A. Lorsch, 75 of Kennard, Nebraska passed away August 1, 2018 at UNMC surrounded by his family. LeRoy was born January 3, 1943, to Arthur and Marjorie (Loftis) Lorsch in Blair. He attended McCarthy Grade School and Blair High School.... View Obituary & Service Information

The family of LeRoy A Lorsch created this Life Tributes page to make it easy to share your memories.

Send flowers to the Lorsch family.