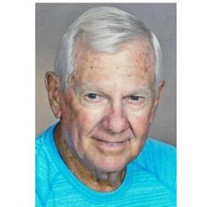 LEON F. BLACK, “LB” Leon was preceded in death by parents, Ella (Maschmann) and Lester Black; brothers, Ben, Duane; and sisters, Betty Smith and Mary Ann Grimstead. Leon is survived by daughters, Cindy Beck (Al) of Blair, NE, and Linda Smith of Gretna NE; grandsons, Jeff Nieto (Samantha), Alex Beck (Amber) and Garrett Smith; granddaughter, Morgan Beck; great-grandchildren, Rocco and Zahra Nieto and Hallie Beck. Leon was born in Omaha and was a 1951 graduate of Omaha Technical High school. He then worked for the Union Pacific Railroad in the Bridge and Building department before enlisting in the United States Marine Corp in 1953 where he proudly served in the Korean campaign until his honorable discharge with rank of sergeant in 1958. Then back to school at the University of Omaha where he received a Bachelor of Science Degree in Industrial Engineering in 1961. Over the next few years Leon worked for several engineering firms including Gollahan and Schemmer, Nance Engineering and Kirkham-Michael & Associates. All this eventually lead to the establishment of Elliott and Black Civil Engineering in 1960's, 70's and 80's. During that time Leon served the city as a very active member of the Omaha Planning Board. Leon was a very busy guy throughout his career adding ventures into the restaurant and lounge business including VIP South, Roberto's Mexican Café, El Bees (Founder) and the Old Mill Lounge as well as owning and racing a stable of horses during the Ak-Sar-Ben racing hey days. After the Elliott & Black stint Leon earned his Real Estate Appraisals license and developed L. Black Appraisal into another very successful business from the 80's until his retirement in 2012. Upon his retirement, Leon passed his appraisal business to his daughter, Cindy and moved to Cape Coral and Sebring Florida. He played many rounds of golf over the next years. He returned "home" to his family in Blair, NE just four months ago. We are grateful for that time with him. Leon Black developed many, many friends in his lifetime with his smile and jovial spirit. Oh, how he will be missed! There will be No Funeral Service at this time. However, a Celebration of Leon's Life will be held at a future date to be announced. Memorials to a charity of your choice.

The family of Leon Black created this Life Tributes page to make it easy to share your memories.

Send flowers to the Black family.