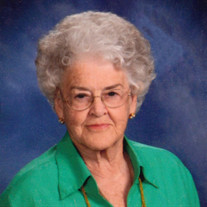 LaVonne L. Rolland, age 93 of Blair, passed away June 1, 2019 surrounded by family. Funeral Services will be held at 10:00AM Wednesday June 5, 2019 at First Lutheran Church. Burial will follow in the Blair Cemetery. Visitation will be held at Campbell Aman Funeral Home on Tuesday June 4, 2019 with family receiving friends from 6:00 to 8:00PM. LaVonne L. Rolland was born July 12, 1925 to Alfred and Clara (Anderson) Quist of Blair. LaVonne was baptized and confirmed at First Lutheran Church of Blair. She attended Blair High School graduating in 1941 at the age of 15, she then went on to get her teaching certificate from Dana College. LaVonne started teaching at Glendale where she would ride her horse to school, as the family only had one car. She then went on to teach at Orum where she met Gustav Rolland. LaVonne and Gustav were married on February 14, 1947. LaVonne then started working with Gus at the Orum Store, running the store for many years. After selling the store the couple made Rolland Feed Service/Rolland’s Farm Supplies Inc. their sole focus. LaVonne enjoyed living on the farm and the many hours spent with Gus. The Rolland Family was awarded the Aksarben Pioneer Farm Family award in 1978, recognized their 100-year family farm. LaVonne was a long-time member and volunteer at First Lutheran Church in Blair where she taught Sunday School and was active in Love Day and Bible Study. One of LaVonne’s greatest joys were her children. She and Gus were foster parents to over 150 children throughout the years. She was a devoted wife, mother and grandmother. LaVonne is survived by her children: son Kevin (Sheryl) Rolland, daughters Kathy Rolland and Kay (Bob) Leehy; brother Darvid (JoAnn) Quist, sister-in-law Joan Quist, brother-in-law Martin Kuhr; grandchildren; Mike (Laura) Rolland, Jaclyn (Travis) Svendgard, Chris Rolland, Jenny Houser, Alan Huhnerkopf, Carney (Cassy) Rolland, Kelby and Avery Rolland, and Luke, Nolan and Megan Leehy, great grandchildren; Cameron, Gherig, Carter, Ella, Clara, Grace, Zach, Bradley, C.J., Bristol, Baylor, Tyson and Payten. She is preceded in death by her husband Gustav, her parents, son Kenny and daughter-in-law Tracey and brothers Quentin and Arvin Quist. Memorials are suggested to First Lutheran Church of Blair, ALS Research, or the charity of the donor’s choice in LaVonne’s name.

LaVonne L. Rolland, age 93 of Blair, passed away June 1, 2019 surrounded by family. Funeral Services will be held at 10:00AM Wednesday June 5, 2019 at First Lutheran Church. Burial will follow in the Blair Cemetery. Visitation will be held at... View Obituary & Service Information

The family of LaVonne L. Rolland created this Life Tributes page to make it easy to share your memories.

Send flowers to the Rolland family.