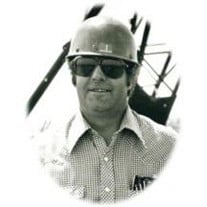 Larry R. Moore, age 76 of Blair, died April 23, 2014 at Crowell Home in Blair, after a long battle with Parkinson’s Disease. A celebration of life gathering will be held Saturday, April 26 from 2:00 to 5:00PM at Campbell Aman Funeral Home in Blair. Larry Moore was raised in Blair and graduated from Blair High School in 1955. After high school he was united in marriage to Vivian Wrigg in 1956. To this union 4 children were born Pam, Brett, Bart and Barry. He worked as a heavy equipment/crane operator and was with the Iron Workers Local #21. Over the years he worked on the construction of countless buildings and structures in the midwest including The Fort Calhoun Nuclear Power Plant, The Mormon Bridge, Woodman Tower, One Pacific Place and the Enron Building in Omaha. He even worked internationally in Iceland and Greenland. Larry had a good time in his spare time; he enjoyed cars, especially stock cars, playing cards and spending time with family and friends. He was very proud of his 10 grandchildren and enjoyed spending time at their activities. He is survived by his children Pam (Dave) Glaser of Blair, Brett (Kris) Moore of Omaha, Bart (Sandy) Moore of Blair, Barry (Karla) Moore of Elkhorn, grandchildren; Nicki (Bryan) Williams of Liberty, MO, Presley Glaser of Blair, Miranda Moore of Omaha, Cassandra Moore of Omaha, Whitney Moore of Blair, Wyatt Moore of Blair, Walker Moore of Blair, Blake Moore of Omaha, Zak (Jackie) Moore of Elkhorn and Lindsey Moore of Omaha, great grandchildren Ariyana, Caedenn and Tynnley Moore, sister Wanda Marsh of Papillion and brother Lowell (Frankie) Moore of North Platte. He was preceded in death by his parents Dan and Violet Moore, brother Neil Moore and an infant brother.

Larry R. Moore, age 76 of Blair, died April 23, 2014 at Crowell Home in Blair, after a long battle with Parkinson&#8217;s Disease. A celebration of life gathering will be held Saturday, April 26 from 2:00 to 5:00PM at Campbell Aman Funeral Home... View Obituary & Service Information

The family of Larry R. Moore created this Life Tributes page to make it easy to share your memories.

Send flowers to the Moore family.