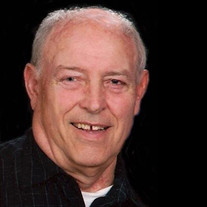 Larry Edwin Hipnar, age 76, of Blair passed away peacefully surrounded by his wife and family on July 13, 2017 at Memorial Community Hospital in Blair. Funeral services will be held Tuesday, July 18 at 10:30 A.M. Graveside services will follow in the Blair Cemetery. Visitation will be held Monday, July 17 at Campbell-Aman Funeral Home with family receiving friends from 6:00-8:00 P.M. Larry was born on April 10, 1941 in Hancock, Iowa, the son of Carl and Meta Hipnar. He was raised in Hancock and graduated from Avoca, Iowa high school in 1959. After high school he began working at International Harvester in Omaha as a diesel mechanic. On October 5, 1963, he was united in marriage to Peggy Krogh at the Methodist Church in Blair. They were blessed with three children: Trisha, Tonya and Todd. The family moved to Blair in 1970 and opened Hipnar Repair and Towing. Even after retirement, Larry continued to help his son working part time in the business. Cars were a big part of Larry’s life, besides working in the car business, Larry purchased a 1932 5-Window Ford Coupe the same day he bought an engagement ring for his wife to be and has cherished them both from that moment on. Besides their love for all the time spent with their children and grandchildren, Larry and Peggy enjoyed their summers with friends and racing, car clubs, camping club, and card club and the winters with all of their fellow “Winter Texans”. Larry is survived by his loving wife of 53 years, Peggy, his daughters, Trisha (Ed) Kosiski of Ralston and Tonya (Rand) Hipnar of Blair, and his son, Todd (Traci) Hipnar of Blair. Eight grandchildren, Zach Lauritzen, Kortney (Micah) Brown, Michaela Kosiski, Tia Kosiski, Ty Hipnar, Kale Kosiski, Tanner Hipnar and Taeja Hipnar, one brother, Glen (Marlene) Hipnar of Shelby, more family members and many friends. He was preceded in death by his parents, his brother and sister-in-law, Don and Marlene Hipnar of Avoca, and two nieces, Pat Whitmore and Deb Hipnar.

Larry Edwin Hipnar, age 76, of Blair passed away peacefully surrounded by his wife and family on July 13, 2017 at Memorial Community Hospital in Blair. Funeral services will be held Tuesday, July 18 at 10:30 A.M. Graveside services will follow... View Obituary & Service Information

The family of Larry E Hipnar created this Life Tributes page to make it easy to share your memories.

Send flowers to the Hipnar family.