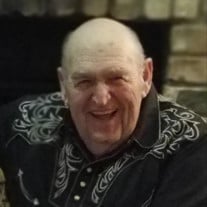 Larry Hadan passed away January 9, 2020. Services will be held at 11:00 AM, Monday, January 13, 2020 at Country Bible Church of Blair. Graveside services will follow in the Blair Cemetery. Visitation will be held Sunday, January 12, 2020 at Campbell Aman Funeral Home with family receiving friends from 6-8 PM. Larry Buster Hadan was born January 8th, 1939 in Omaha, NE to August and Margaretha (Lamp) Hadan. Larry passed away on January 9th, 2020 at the age of 81 years young. He leaves behind a loving wife of 63 years. Larry was baptized into faith at St. Johns Lutheran Church in Benson, NE. He married Merle (Suzi) Livermore on June 1st, 1957 in Blair, NE. During their unity they were blessed with three daughters. They raised their family on a farm near Bennington, NE. They would be later blessed with eight grandchildren and 14 great grandchildren who love him with every breath they have. As a young child, Larry worked on his family farm near Irvington, NE. After their marriage, Larry and Suzi purchased the family farm near Bennington, NE and they resided there until 2011. Larry farmed corn and soybeans along with raising livestock. In 1986, Larry founded and owned/operated Larry Hadan Trucking. Larry was very active in the community. He was past President of Omaha Saddle Club, Nebraska Iowa Model Train Railroad Club, Larry Hadan Trucking, Bennington Volunteer Fire Department and current President of Douglas County Farm Bureau Federation. He was a volunteer firefighter/EMT at Bennington Volunteer Fire Department for 45 plus years. His daughter, Amy, was inspired by his love of helping people and pursued a degree in nursing. His daughter, Victoria, worked along side of him in the trucking business. She dispatched and was his personal assistant. His daughter, Tammy, inherited his mechanical ability. She worked in his shop on the trucks and trailers and operated a wheel polishing machine. Larry's hobbies included: Horseback riding, leather crafting, riding his Harley and telling jokes and stories to those he knew and even complete strangers. Larry was preceded in death by his parents, August and Margaretha Hadan, his sister Darleen Tonack, and granddaughter Janee' Hadan. He survived by his wife, Suzi Hadan. Daughters, Amy Fleming, Victoria Dorau and fiancée Todd Roche, Tammy Spring and fiancée Danny Mohr. Grandchildren Kristen Cook (AJ), Joshua Hadan, Janee' Hadan, Nic Bonney (Sydney), Justin Hadan, Ashley Spring, MaKayla Walker, Jarid Spring Great Grandchildren Kendyl, Taevon, Bryson, Ella, Aubrey, Derek, Quinci, Reagan, Austin, Karsyn, Levi, Jase, Ryan and Lailani.

The family of Larry Hadan created this Life Tributes page to make it easy to share your memories.

Send flowers to the Hadan family.