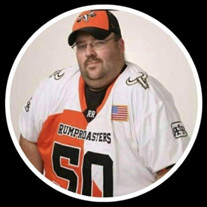 ***The family has asked, that all those in attendance for "Moose" to wear a mask*** Kristopher “Moose” Orr, passed away April 13, 2021 in Omaha, Nebraska. Funeral services will be held Tuesday, April 20, at Reach Church (formerly Country Bible Church) at 10:00AM. Graveside services will follow in the Blair Cemetery. Visitation will be held Monday, April 19, with family receiving friends from 5:00 to 8:00PM at Campbell Aman Funeral Home. Kristopher Michael “Moose” Orr was born July 27, 1977 in Council Bluffs, Iowa to Raymond Michael and Diane Lynn (Bergantzel) Orr. He was blessed with two sisters Kari Lynn Orr and Kelli Lynn Kramer. Kris attended pre school at Timothy Lutheran and Edison in Council Bluffs. He attended Wolbach Community School from Kindergarten to 4th grade. Kris then moved to Scotia, Nebraska where he attended North Loup / Scotia Schools graduating with the class of 1995. Kris was baptized at Scotia Baptist Church with his mother and sisters on March 31, 1991 on Easter Sunday. Kris attended Frontier School of the Bible in LaGrange, Wyoming for 2 years for youth ministry, then attended to Hastings Community College in Hastings, NE for 2 years for construction. At that time, he moved to Blair, Nebraska and then took an internship with SE Smith, the local lumberyard in Blair. Kris then took off on a course of customer service jobs from Taco Bell, to Trans-Actions Marketing, Burn Securities at Cargill, Vac-Con, Henry Doorly Zoo, Nobbies, J C Penney, Rusty Eck Ford, and McDonalds before settling in with the Blair Schools as a paraprofessional. Kris was very active in church activities and his passion was leading children to Christ. He served from 1993 through 2018 as a Counselor at Homeward Trail Bible Camp in Mason City, Nebraska and from 2018 to 2019, Kris served the kids at Camp Joy in Republican City, NE. After moving to Blair, Kris was also involved in Student Venture Club for several years also married many couples in the Nebraska and Iowa area. Kris was a charter member of Great Commission Baptist Church in 2009 and organized and operated the Youth Group of Great Commission Baptist Church for many years. Kris joined the Blair Jaycees in 1999 where he was given the nickname Moose and it stuck. Kris also joined the Millard Jaycees in 2003 and obtained his 10th degree. Kris met his bride Diane through the Jaycees and they both served in various capacities with Kris proposing at a Jaycee convention. Kris served on the Nebraska State Jaycees Board under various State Jaycees Presidents serving as the Individual Development Vice President, Chaplain, Membership Vice President, District Director and various other State level positions. Omaha Beef Indoor Arena Football Games every season since, a legacy of 18 years and will be missed by fans, players and opposing teams alike. Kris was proceeded in death by his father Raymond Michael Orr, grandparents Charles Bergantzel and Etta Mae (Harris) Bergantzel, Leo and Agnes (Powers) Olson, John Orr, Mary Hansen, aunt Julie (Orr) Story, and father-in-law Leonard Kloewer. Kris joined the Omaha Beef RumpRoasters in 2003 where he has entertained the crowds for the football games. Kris is survived by his loving wife of 17 1/2 years, Diane (Kloewer) Orr, mother and stepfather Diane and Ken Hansen of Apalachicola, FL / Blair, NE, sisters Kari (Jim) Tobin of Phoenix, AZ, and Kelli Kramer (Doug Potts) of Orlando, FL, nephews and nieces Josiah, Brooklyn, Aiden, and Jaxon Tobin, Ben and Amelia Peterson, uncles Dan Bergantzel of Blair, Lloyd Bergantzel of Council Bluffs, Kyle Olson of Council Bluffs, Dale Story of Peoria, Illinois, mother-in-law Donna Kloewer of Underwood, IA, along with numerous cousins. Kris loved the Lord, had a huge heart and touched the many who loved him.

***The family has asked, that all those in attendance for "Moose" to wear a mask*** Kristopher &#8220;Moose&#8221; Orr, passed away April 13, 2021 in Omaha, Nebraska. Funeral services will be held Tuesday, April 20, at Reach Church (formerly... View Obituary & Service Information

The family of Kristopher "Moose" Orr created this Life Tributes page to make it easy to share your memories.

***The family has asked, that all those in attendance for &quot;Moose&quot;...

Send flowers to the Orr family.