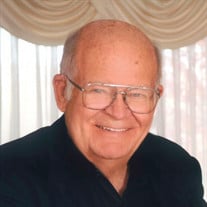 Kenneth Hilton Rhoades, born May 22, 1931, passed away Monday, March 21, 2022. Visitation is Thursday, March 24, 2022, at the Congregational Church in Blair from 5:30 – 7:30 p.m. Services are at 10:30 a.m. on Friday, March 25, 2022, at the Methodist Church in Blair. Private internment at Rose Hill Cemetery. Services will be available for Live Viewing at: https://www.youtube.com/channel/UCuehkOyrZGFBrg8F3LCSEGg AND https://www.facebook.com/groups/163883280403150 Kenneth was born May 22, 1931, in Blair, the son of J. Hilton and E. Lucille (Jensen) Rhoades. He was raised in Blair, where he attended Blair High School and later the University of Nebraska in Lincoln. Ken began working with his father Hilton, after college in the family newspaper business where they worked together for many years. He learned the newspaper trade from the ground up doing basically every job including reporting, sales, running the press, and even making runs to the post office. On August 24, 1950, he was united in marriage to his high school sweetheart, Virginia Jensen, in Blair. Virginia was the love of his life for 72 years, and the couple lived together in Blair their entire lives. Ken and Virginia began working together in the newspaper business almost immediately after marriage. Virginia handled all the bookkeeping and Ken was the publisher. He was a classic newspaper publisher with ink in his veins. With camera in hand, he rushed to every fire call or accident to take pictures, even in the middle of the night. On one occasion, he was taking pictures of a burning building, when the doors blew open after an explosion. He suffered burns, but continued to take photos for the paper. People loved his column, ‘This and That’ where he talked about everything from the latest happenings in city hall, to something cute his kids did over the weekend. He was never afraid to stir the pot with his editorials, where he called it like it saw it. He spoke his mind in an effort to improve his community. There were many cases where his news coverage and comments spearheaded change or projects that improved the community. Throughout his career Ken was very active in the Nebraska Press Association (NPA) as well as the National newspaper Association (NNA). He served on numerous committees for both associations and also as president of NPA in 1990 and NNA in 2001. The NNA awarded him with the James Amos Award, and he was also honored with the Nebraska Press Association Master Editor Publisher Award as well as being inducted to the Nebraska Press Association Hall of Fame. All were the highest honors a publisher can receive. Through his association with NNA, Ken was also able personally meet several Presidents including Ronald Reagan, Bill Clinton and George W. Bush. He was one of the most community minded people you’ll ever meet. Over the course of his life, he joined basically every community service organization in Washington County and was the epitome of what a service club member should be. He would attend every meeting, participate in every community service project and sell whatever the club was selling for their fundraiser. Among his favorite organizations were the Lions Club, Rotary Club and the Blair Optimists. He was also honored many times for his service to his community. He received the Dana College Community Service Award, the Blair Chamber of Commerce Community Service Award, Blair High School Distinguished Service Award, the Blair Rotary Club Service Above Self and many others. Ken was an avid pilot and enjoyed flying his Bonanza airplane to Okoboji almost every weekend during the summer. He and Virginia enjoyed spending time at Lake Okoboji, especially when their children, grandchildren or great-grandchildren were there. He would take them for boat rides, water skiing and swimming. In his later years, Ken would delight in just watching his grand children and great-grandchildren play. He would sit with a smile on his face taking it all in. Over the course of his lifetime, Ken and Virginia had the opportunity to do a lot of traveling including trips to Europe, China, Russia, Japan and Australia. They loved to drive through the mountains of Colorado near Estes Park, and often visited Branson, Missouri to enjoy the shows and scenery. Ken is survived by wife Virginia, son Mark (Betty) Rhoades, daughter Penny (Mike) Overmann, grandchildren Mindy (Marty) Rump, Jessica (Rod) Madsen, Nathan (Melissa) Suverkubbe, Chris (Dalyn) Rhoades, Travis (Kristen) Rhoades, Collin (Jessica) Overmann, Brandon Overmann and 12 great-grandchildren. He was preceded in death by his parents, sister Charlotte (Rhoades) Gilinski, and oldest daughter Candace (Rhoades) Suverkubbe. Memorials may be directed to the Congregational Church of Blair, Blair Fire and Rescue Squad and the Rose Hill Cemetery.

The family of Kenneth H. Rhoades created this Life Tributes page to make it easy to share your memories.

Send flowers to the Rhoades family.