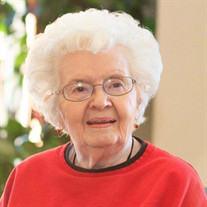 Kathryn E. Bauer was born June 19, 1920 to John Swingholm and Christina Knudson Swingholm in Wolbach, NE. The Swingholm family moved to Blair, NE in March of 1929. She married Edward C. Rhoades of Parsons, KS in Papillion, NE on July 31, 1937. Into this marriage four children were born. John Rhoades, Janet Rhoades, Linda Rhoades Kruse and Edward C. Rhoades, Jr. Ed, Sr. passed away November 25, 1986. In her early years of marriage, she was a homemaker and later she was an employee of Great Plains Communication for 20 years and retired in 1985. On December 20, 1990, she married Ralph Bauer at Lake Tahoe, NV at her stepdaughter’s home. Ralph passed away February 24, 2000. Kate was a lifelong member of the First Lutheran Church. She was a member of the Love Day group of First Lutheran making quilts which was one of her hobbies. She also enjoyed bowling, crocheting, reading, gardening and playing cards. Kate was also a lifetime member of the VFW Post 1251 and a past president. Kate was the third of ten children. She enjoyed the Saturday coffees that would include most all of her 7 sisters, her brother and her mom. As the family continued to grow more and more family would attend these Saturday coffees. It was an enjoyable time for all. Kate is survived by her daughters: Janet Rhoades of Blair NE, Linda (Gene) Kruse of Herman, NE; son Ed (Gailanne) Rhoades; step children: Roger Bauer, Barb Lane and Connie and Ronnie Sylvis; special card playing buddy Mike Lehrkamp; 10 grandchildren, 15 great-grandchildren, 14 great great-grandchildren, 2 step grandchildren and 6 step great grandchildren; sisters: Patsy Blinn of AZ and Ruby (Evan) Clements of CA; as well as many nieces and nephews. Kate was preceded in death by her husbands, infant son John, infant grandson, brother and sister-in-law John (Millie) Swingholm, sister and brother-in-law Dorothy (Harold) Brooks, sister and brother-in-law Lola (Bill) Hamke, sister Mary Swingholm, brother Richard Swingholm, sister Darlene Gardner and sister Peggy Ray. A private service will be held at Campbell Aman Funeral Home at 10:30 AM Friday, June 19, 2020 and will be live streamed on the Campbell Aman Funeral Home Facebook page. A celebration of life will be held at a later date. Memorials may be directed to the charity of your choice, the First Lutheran Church or Good Shepherd Lutheran Home.

The family of Kathryn E. Bauer created this Life Tributes page to make it easy to share your memories.

Send flowers to the Bauer family.