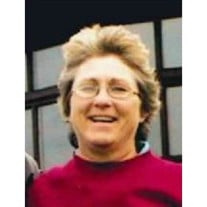 Kathleen S. Foley was born April 17th, 1957 in Blair, NE to John and Joan Foley. On November 8, 2014, she passed away after a long and courageous battle with cancer. Visitation will be held at Campbell Aman Funeral Home on Tuesday, November 11th, with the family receiving friends from 5 to 8 p.m. and the Rosary beginning at 7 p.m. The funeral service will be held on Wednesday, November 12th, at St. Francis Borgia Church at 10 a.m. In 1975, Kathy graduated from Blair High School, where she was a standout athlete who excelled in several sports. She was one of the first athletes ever inducted into the Blair High School Hall of Fame. She attended the University of Nebraska at Lincoln, from which she graduated with a B.S. in physical education. While at UNL she played a key role in the early years of the Nebraska softball program, starting all four years and earning four letters, and setting many records, some of which stand today. Later, Kathy earned a master's degree from Wayne State College. Kathy was a long time instructor and coach at Dana College and ultimately became the school’s first female athletic director. She was inducted into the Dana College Hall of Fame. In addition to making athletics her career, Kathy also devoted much of her personal time as a coach and mentor to her nieces and nephews, as well as to countless others whose lives she impacted. Kathy had a passion for sports that continued her entire life. She played on legendary softball teams of Fairway Oil/HunTel, which gave rise to numerous and long-lasting special friendships.. Her calling was to coach and mentor young people and to help them improve and attain their goals. She had a special gift of making those she touched or mentored feel like they were very special. She touched the lives of many by believing in them. There was no challenge too great for Kathy, and that is what she taught others…..believe in yourself, work hard, and you can achieve your dreams. She was preceded in Death by her father John Foley. She is survived by her Mother Joan Foley of Blair, Nebraska and eight sisters and brothers Debbie & (Larry) Wetterberg, Omaha, NE, Diane Kopf Foley, Omaha, NE, Julie Foley, Blair, NE, Pam & (Keith) Southworth, Papillion, NE, John & (Krista) Foley, Dallas, TX, Ellen & (Bill) Miller, Blair, NE, Thomas Foley, San Clemente, CA, Joe & (Barbara) Foley, Omaha, NE, 19 nieces and nephews, and 7 great nieces and nephews. Memorials may be directed to Kathleen’s family.

Kathleen S. Foley was born April 17th, 1957 in Blair, NE to John and Joan Foley. On November 8, 2014, she passed away after a long and courageous battle with cancer. Visitation will be held at Campbell Aman Funeral Home on Tuesday, November... View Obituary & Service Information

The family of Kathleen S. Foley created this Life Tributes page to make it easy to share your memories.

Send flowers to the Foley family.