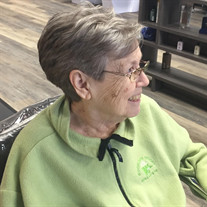 Judith Ann Jensen was born in Minden, Nebraska on April 7, 1939 to Kenneth Ray Jensen and Rowena Alsyne (Smith) Jensen. Her father’s career as a civil engineer kept the family moving across the Midwest for several years, before the family settled in Sioux City, Iowa, where Judy attended high school. After graduation, Judy attended the University of Iowa and received her bachelor of nursing degree in 1960. She married Tom Sick of Blair in 1963 and they lived in Omaha while Judy worked as a nurse. The young family welcomed a son, Brad, into the world in 1965. Another son, Mitch, followed in 1968. The family moved to Blair in 1973, and Judy resumed work in 1981, first as a home healthcare nurse, and then as an administrator at Blair Memorial Community Hospital until she retired, after having worked nearly 40 years in nursing and health administration. Judy was a devoted wife, mother and grandmother; an avid gardener, birdwatcher, and nature enthusiast; and a lifelong Cornhusker fan. Judy passed away suddenly at her home on Sunday evening, September 9, 2018. She was 79. She is survived by her sister Susan Dermody and her brother Ken Jensen, both of the Seattle area; by her husband Tom Sick of Blair; her sons Brad Sick of Culver City, California and Mitch Sick of Elkhorn; and grandchildren Andrew and William Sick, of the Los Angeles area, and Alexandra and Isabela Sick of Elkhorn. A visitation service will be held Tuesday, September 18, from 5:00 to 8:00 pm at Campbell Aman Funeral Home.

Judith Ann Jensen was born in Minden, Nebraska on April 7, 1939 to Kenneth Ray Jensen and Rowena Alsyne (Smith) Jensen. Her father&#8217;s career as a civil engineer kept the family moving across the Midwest for several years, before the family... View Obituary & Service Information

The family of Judith Ann Sick created this Life Tributes page to make it easy to share your memories.

Send flowers to the Sick family.