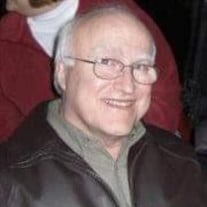 Joseph Anderson was born on August 25, 1948 to Maynard and Virgie Anderson in Lincoln, Nebraska. He moved to Blair at the age of five. He was a life-long member of First Lutheran Church where he served as president of the congregation for two years and taught confirmation until his health declined. He was a dedicated father, husband, baby brother, and educator. He enjoyed fishing with his brothers, road trips, and was a devoted friend and mentor to many. He had an extremely dry sense of humor that was lost on some, especially high school freshmen. It was a sense of humor that he kept up until his last breath. After a recent episode of passing out, the paramedics came to the house and as they roused him asked, “Sir, do you use oxygen?” His words after 15 minutes of being unresponsive were, “Don’t we all?” During his career he staged countless plays and musicals with an attention to detail that is rarely found at a high school or community theater level. His family knows that his standards as a teacher must have been quite high by the number of times students attempted to egg and t.p. our house. If only you all could reprise that role right now – Sarah is running a little low. We often thought that Joe could have sought out a bigger stage for his craft; he certainly was talented enough for it. But then, we all would do well to notice that his craft was not limited to the stage he set or the acting he directed. Mr. Anderson was a community builder. He sought to build a community where every single person had a role. Every single person was important and every one of you fit in. If you leading actors ever wondered why he was so adamant about signing up for set construction time, it was because he wanted you to see, get to know, and love the misfits and the crew as much as he did. Some of you did, but he is likely still waiting on the rest of you to complete those construction hours. So once this pandemic lifts, go volunteer at the high school or the community theater. Go build community. He likely didn’t know how much of an impact he had on this community. We think he would have been heartened to know all of the comments that so many of you have shared about him. But, he also would have been horrified at your grammar. He is preceded in death by parents Maynard and Virgie Anderson, his first wife Barbara Sue Nelson Anderson, his sisters Mary Bargren, Deanna Freitag, Lois Harrer, Carolle Newman, and Lorraine Patterson, and his brothers Bob Anderson and Bill Anderson. He is survived by his wife Sarah Anderson, daughter Gretchen Ierien, son-in-law Bob Ierien, son Carl Anderson, granddaughters Christiane Anderson, Makayla Anderson, Rachel Ierien, and Megan Ierien, brothers Edward Anderson and John Anderson, and sister Lynn Clark. Memorials should be directed to First Lutheran Church and the Blair High School Drama Department. Memorial service will be planned at a later date.

Joseph Anderson was born on August 25, 1948 to Maynard and Virgie Anderson in Lincoln, Nebraska. He moved to Blair at the age of five. He was a life-long member of First Lutheran Church where he served as president of the congregation for two... View Obituary & Service Information

The family of Joseph Steven Anderson created this Life Tributes page to make it easy to share your memories.

Send flowers to the Anderson family.