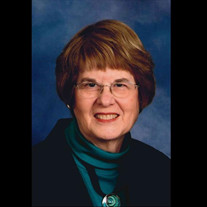 JoAnn Marie Hohensee, age 77 of Blair, passed away June 16, 2016 at her home in Blair. Memorial Services will be held Wednesday June 22, 2016 at 11:00AM at First Lutheran Church in Blair. Visitation will be held Tuesday June 21, 2016 from 6:00 to 8:00PM at First Lutheran church. JoAnn Marie Hohensee was born on September 2, 1938 in Glenvil, Nebraska the daughter of Robert and Irene (Hinrichs) Ellermeier. She graduated from Bruning High School in 1956. After high school she attended the University of Nebraska where she studied home economics and met her husband Roger. On June 8, 1958 JoAnn and Roger were united in marriage at Trinity Lutheran Church in Bruning, Nebraska. The couple made their home in Milligan, Nebraska from 1958-59, Litchfield from 1959-1961, and then settled in Blair. She was a para-professional at Dana College in the library for 24 years. In 1992 JoAnn graduated from Dana College with a Religion major. She was a member of First Lutheran Church in Blair and a member of Cottonwood Quilters and several other quilting groups. She was also a member of the Friends of the Library board in Blair, and volunteered with the hospital auxiliary. JoAnn had a passion for quilting which she enthusiastically shared with others. JoAnn is survived by her husband Roger Hohensee of Blair, daughter Karla (Alan) Conrad of Jasper, MN; son Steve (Donnie) Hohensee of Moose Pass, AK; grandchildren Briana and Ethan Conrad; sister Ruth Stark of Houston, TX; sister Marilyn (Bob) Neville of Lincoln, NE; sister Janice Rubin of Houston, TX; aunt Janet Hinrichs of Omaha, NE; nieces, nephews, cousins, and friends. She was preceded in death by her parents, sister and brother in law Dorothy and Jerry Elliott, sister in law Trudy Hohensee, niece Mari Elliott, and nephew Howie Elliott. Memorials may be directed to First Lutheran Church or the charity of the donor’s choice. Services provided by Campbell Aman Funeral Home.

JoAnn Marie Hohensee, age 77 of Blair, passed away June 16, 2016 at her home in Blair. Memorial Services will be held Wednesday June 22, 2016 at 11:00AM at First Lutheran Church in Blair. Visitation will be held Tuesday June 21, 2016 from... View Obituary & Service Information

The family of JoAnn Marie Hohensee created this Life Tributes page to make it easy to share your memories.

Send flowers to the Hohensee family.