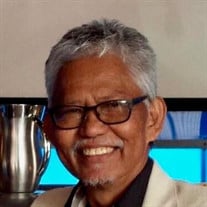 I was once told, “the universe has a plan, you do not”, and I carried that phrase with me through every hardship I ever faced. The chances of having both parents pass from pancreatic cancer are astronomically small, especially with it being back-to-back; but, I guess they weren’t joking when they said it was 2020, too. You had unique, you had eccentric, and then you had my dad, who was in an entirely different banana shirted league than everyone else. Born on April 23,1949 in the province of Bukidnon, Philippines, my dad chased dreams that none had chased before him. From graduating college with a degree in chemistry to receiving a scholarship for medical school, my dad was nothing short of spectacular. Just like my mom, my dad too, was a doctor. He graduated with the class of 1991 instead of 1977 with my mom because he spent that time traveling between the United States and the Philippines. My dad worked as a chemist at an asphalt company in Texas until my mom was able to land a job with her forever home in Rosebud, SD before starting her residency in North Dakota and then the eventual move to Blair; however, we all know the story, since I wrote it just before I wrote this. My dad was an avid bowler, bowling with his best “brothers” in various national bowling tournaments, state tournaments, and city tournaments, you couldn’t go to league without someone screaming “JESSE!” when he walked through the door. He greeted everyone the same. Nobody had a bad word to say about my dad, ever. He was always friendly. He was always smiling. And he was always having fun. To lose someone like him, is to lose that eccentric piece of life, everyone seems to gravitate towards. There aren't many words to say when you lose a parent, especially losing both so soon and to the same diagnosis, but all I can say is that we celebrate the life that we were given and the honor the spot in our hearts that they keep. I love you very much, and my heart will never be the same. I hope that wherever in this universe you are, you're driving that fancy car along the coastal highway in California, across the United States, and down to the highway down that leads to Key West. Jesse is survived by his one and only daughter, Jassalya Anne (Jash) and four older siblings: Emilano (in Texas), Leonie, Naomi, and Jonie (all in the Philippines). My dad followed my other angel in heaven on March 14, 2022; exactly two years after my mom's initial cancer diagnosis. When they said the universe had a plan, they weren't kidding. My dad was cremated and his ashes, along with my moms, will be turned into a diamond ring. A bowling tournament will be held in his honor sometime after his birthday. Announcements will be made later.

I was once told, &#8220;the universe has a plan, you do not&#8221;, and I carried that phrase with me through every hardship I ever faced. The chances of having both parents pass from pancreatic cancer are astronomically small, especially with... View Obituary & Service Information

The family of Dr. Jesse Layao Villafranca created this Life Tributes page to make it easy to share your memories.

Send flowers to the Villafranca family.