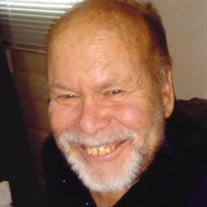 Jerry Clarence Didion, 63 of Blair, NE passed away February 25, 2020 after a courageous battle with ALS. Jerry was born May 16, 1956 in Toledo, Ohio to Clarence Didion (Toledo, OH) and Donna Kenny (Casper, WY). After his parents’ divorce, he moved to Wyoming with his mother and sister. He attended Natrona County High School in Casper. Jerry worked several jobs in Wyoming, most notably as an oil field worker before he moved to Las Vegas, Nevada in the late 1980’s. While in Las Vegas, Jerry worked for property management companies as a maintenance man, eventually becoming a supervisor and earning his AC certification. In 2008, Jerry returned to Casper, WY where he worked for Walmart and met his wife, Karen. They were married on July 13, 2014 on Caper Mountain. Jerry is survived by his wife and son Andrew, both of Blair, NE; daughter Jennifer (Jamie) Shull of Shirley, AR, son Adam (Rhonda) of Casper, WY, daughter Susan (Justin) Smedley of Rogers, AR; both of his parents; sister Carol (Fred) Smith of Casper, WY; many grandchildren, nieces, nephews and cousins. He is preceded in death by his nephew Kris Smith. Jerry had a lifelong love of the outdoors and enjoyed fishing, shooting, camping, golfing and panning for gold. He enjoyed watching football and was a fan of the Carolina Panthers from the start of their franchise. He also loved spending time with his family whenever he could. After his diagnosis of ALS in 2018, Jerry still tried to enjoy every day to its fullest doing as much as he could with what time he had. He wanted to be remembered with laughter and love. Celebrations of his life will take place in May in Blair, NE and in July in Casper, WY. The family will announce details when they are available. Memorials may be directed to his family, and ALS Association Mid-America chapter, or ALS in the Heartland.

Jerry Clarence Didion, 63 of Blair, NE passed away February 25, 2020 after a courageous battle with ALS. Jerry was born May 16, 1956 in Toledo, Ohio to Clarence Didion (Toledo, OH) and Donna Kenny (Casper, WY). After his parents&#8217; divorce,... View Obituary & Service Information

The family of Jerry C Didion created this Life Tributes page to make it easy to share your memories.

Send flowers to the Didion family.