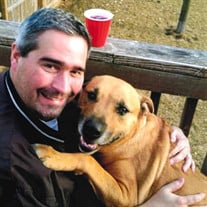 Jeffrey Michael Sevier, died Monday, February 14, 2022 at his home in Omaha, Nebraska. He was 51 years old. Jeff was born in Fairfax County, Virginia in 1970 to Larry and Peggy Sevier. Jeff started high school in Virginia, but the family moved to Norton, Kansas in 1986 and Jeff completed High School at Norton Community High School. From an early age, Jeff was an outstanding athlete. He attended Cloud County Community College in Concordia, Kansas on a baseball scholarship and his last two years at Hastings College, Hastings, Nebraska on a baseball scholarship. During his college career, Jeff amassed an outstanding record and recorded three no hitters. Jeff graduated from Hastings College in 1993 with a Bachelor of Arts in Computer Science. Following graduation, Jeff launched his career with Mid America Computer Corporation, Blair, Nebraska and had a very successful career in Computer Technology and e-mail systems. Jeff and Shawna Foster were married in 2014 and even though they later divorced, remained good friends. Jeff had an infectious smile and magnetic personality and make friends easily everywhere he went. He had many friends in Omaha and Blair, Nebraska. If you were Jeff’s friend, he would always be there for you. Jeff also loved spending time with his daughter Ashleigh, his parents, and brother and his family at their cabin on Table Rock Lake. Jeff is survived by his daughter Ashleigh, Omaha; parents: Larry and Peggy Sevier, Branson West, Missouri; brother Christopher Sevier, Wichita, Kansas; rescue kitten Mickey (who now resides with Jeff’s parents) and several aunts, uncles, nieces, nephews, cousins, and many beloved friends. Memorials may be directed to the Nebraska Humane Society of Omaha. Services will be held April 2, 2022 at Heafey Hoffman Dworak Cutler Mortuary, West Center Chapel, 7805 W. Center Rd., Omaha, NE from 4 to 6 PM with a Celebration of life service at 5 PM.

Jeffrey Michael Sevier, died Monday, February 14, 2022 at his home in Omaha, Nebraska. He was 51 years old. Jeff was born in Fairfax County, Virginia in 1970 to Larry and Peggy Sevier. Jeff started high school in Virginia, but the family moved... View Obituary & Service Information

The family of Jeffrey M Sevier created this Life Tributes page to make it easy to share your memories.

Send flowers to the Sevier family.