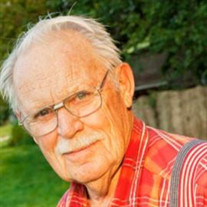 Jean F. Gregerson stepped into the presence of his Lord & Savior, Jesus Christ, on August 28, 2020, surrounded by his wife and children. Visitation will be Thursday, September 3, from 6pm-8pm at Campbell Aman Funeral Home. Funeral services will be held Friday, September 4, at 10:30am at the funeral home, with military graveside services following at the German Cemetery in rural Washington County. Jean was born on the family farm near Bennington, NE, on November 4, 1938, to Fred & Helen (Jipp) Gregerson. He attended primary school in rural Washington County and graduated from Blair High School in 1956. He attended Omaha University, where he was involved in band, football and ROTC, graduating in 1960 with an engineering degree. Following graduation, he commissioned as an officer in the Air Force, where he served until 1967. After his military service, he worked as an industrial engineer at Tip Top Fabergé and Pendleton Woolen Mills. Jean married the love of his life, Ann Tinnel, on November 2, 1962, in Shreveport, LA, after their wedding was cancelled due to his military travel restrictions. Together they had three children, Kelli, Keith and Paula. They moved the family back to the family farm near Bennington in 1972 and lived there until health reasons prevented them from staying in the country any longer. Jean and Ann were active in several churches throughout their life and had a passion to reach and help people. Jean loved hunting, fishing, gardening and photography, but his greatest love was for his family. He was a loyal supporter of his kids and grandkids and took great pride in their accomplishments large and small. A quiet, steady and dedicated man, he will be fondly remembered for his gentleness, generosity, kindness, quirky sense of humor and his never-ending faithfulness. Jean is survived by his wife, Ann; children, Kelli (Brian) Bentley, Keith (Kristi) Gregerson and Paula (Scott) Wedel; grandchildren, Erik (Shannon) Wedel, Alyssa (Spencer) Krogh, Brittnie Wedel, Zach (Kelsey) Gregerson, Chase Gregerson, Lyndsie (Jordan Ferraro) Wedel, Brendan Bentley, Anna Gregerson, Grace Bentley, Jakob Wedel and Claire Bentley; great grandchild, Jack Krogh; sisters-in-law, Sally (Scotty) Smith and Peggy (Jerry) Williams; brother-in-law, Jack (Pat) Tinnel; many cousins and dear friends. He was preceded in death by his parents, parents-in-law and younger brother, Eric. Memorials may be directed to Christ for the City International or the Alzheimer’s Association.

Jean F. Gregerson stepped into the presence of his Lord & Savior, Jesus Christ, on August 28, 2020, surrounded by his wife and children. Visitation will be Thursday, September 3, from 6pm-8pm at Campbell Aman Funeral Home. Funeral services... View Obituary & Service Information

The family of Jean F. Gregerson created this Life Tributes page to make it easy to share your memories.

Jean F. Gregerson stepped into the presence of his Lord &amp; Savior,...

Send flowers to the Gregerson family.