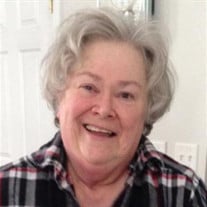 Janet E Sigerson age 67 of Blair, went home to her heavenly Father April 1, 2019 while at her home in Lakeland. Memorial services will be held Monday, April 8, 2019 at 10:30 AM at Country Bible Church in Blair. Janet was born on June 9, 1951 in Omaha, Nebraska the daughter of Leo and Mildred (Haden) Maloney. Janet was raised in the Florence neighborhood of Omaha. She attended high school at Notre Dame in Omaha and later, the College of St. Mary for her nursing degree. She married George Adler, in June of 1973 and together they raised three sons: James David, Dennis (Denny) Michael and Christopher George. Later in life, she met and was married to John Sigerson in June of 2000. Jan devoted most of her life to her work as a Chemical Dependency Counselor, as well as sponsoring many people. Jan was a friend of Bill W. for 37 years, strongly committed to her own sobriety as well as supporting others in their walk. Jan lived in several different places throughout her life from Omaha, to McAllen, Tx, Myrtle Beach, SC and her favorite place, Richmond, VA. She moved to Blair in 2015 and was welcomed by so many people in the community. She was active in a local book club and made special friends there and was a member at the YMCA, where she spent countless days doing her favorite activity, swimming with her granddaughter Teagan, as she worked hard to improve her health. Jan's joy came from spending time with those so near and dear to her who so fondly called her Nana. The activity did not matter, it was being able to see and share in the joy brought to others. Jan also loved to cross-stitch and crochet. Jan was a kind, beautiful, passionate and loving soul who walked daily in her faith and treasured her family and friends. On December 1st, 2013 she was born again, being baptized at Wildewood Christian Church. Jan embraced the Lord's promise of eternal life. Her favorite expression was "Lord have mercy", and we know that she is now walking with Him, her Irish eyes twinkling and bright as she embraces the mercy and love in Heaven. Jan had a courageous fighting spirit through her recent battle with cancer, treasuring the word - H.O.P.E. = Hold On, Pain Ends. Jan is survived by her sons: James (Jeannine) Adler of Omaha and Chris (Melissa) Adler of Blair; daughter-in-law Susan Adler of Omaha; grandchildren: Joseph “Joey”, Zach, Josh, Madison, Jesse, Chloe, Katie, Grace, Morgan, Claire, McKenzi, Spencer and Teagan; siblings: Jack (Mary) Maloney of Omaha, Bob (Linda) Maloney of Omaha, Sue (Rick) Stanger of Bennington; nieces and nephews: Kelly, Karin and Tom; and her very special and loyal companion, Daisy. She was preceded in death by her parents, son Dennis “Denny” Adler and husband John Sigerson.

Janet E Sigerson age 67 of Blair, went home to her heavenly Father April 1, 2019 while at her home in Lakeland. Memorial services will be held Monday, April 8, 2019 at 10:30 AM at Country Bible Church in Blair. Janet was born on June... View Obituary & Service Information

The family of Janet E Sigerson created this Life Tributes page to make it easy to share your memories.

Send flowers to the Sigerson family.