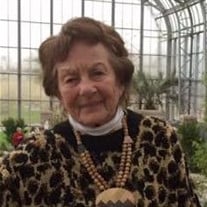 Janet Marie Foley, 91 of Blair, passed away June 26, 2019 at her home. Mass of Christian burial will be held at 10:00 am Saturday, June 29, 2019 at St. Francis Borgia Catholic Church in Blair. Burial will follow services in the Holy Cross Cemetery in Blair. Visitation will be held Friday, June 28 at Campbell Aman Funeral Home from 6 to 8 PM with a Rosary at 7 PM. Janet was born on a farm seven miles south of Blair on August 3, 1927. Janet was the fifth child of Robert and Alma Johnson Foley. Janet attended her first eight grades at Maney School, a one-room school near the farm. She graduated from Blair High School on May 19, 1944. Janet was an employee of Nebraska Public Power Company in Omaha for three years. She married Robert E. O’Hanlon in 1947 and raised Robert’s two boys, Robert Jr., and Richard. Six children were born to Janet and Robert. Their names are Daniel, Maureen, William, Suzanne, Terrence and Paul. Janet and her family lived in Omaha, Nebraska, Park Forest, Illinois, Denver Colorado, LaGrange Illinois, Millard Nebraska and back to Blair in 1970. She was hired by Blair Community Schools in 1971 to plan and create the original school food service program. Janet worked with twenty women from the area to make lunch for over two thousand students in five schools. She was Food Services Director for twenty-two years. Janet has had two books published including “The Three Lives of Janet Foley” and “Interesting Places Janey Foley Has Visited” available on Amazon.com She built a home on the original Foley homestead that her Great Grandfather, John Foley, received from the US Government in 1870. Surprising everyone, at the age of sixty-two, she joined the peace corps and spent the next two years in Lesotho, Africa, where she trained and influenced people and made friendships from around the world that lasted a lifetime. When she returned to the United States, she accepted a job as Food Services Director for Jackson Hole Wyoming Schools where she lived for five years and retired at the age of seventy. Janet had a passion for travel and has explored sixty-five countries. For the last few years she spent the winters in Fort Myers Florida where her son Terrence kept a winter home for her. Janet is survived by her Children Robert, Daniel, Maureen, William, Suzanne, Terrence and Paul. She is survived by nine Grandchildren, her stepson Bob Jr.’s three children and numerous Great Grandchildren. She also leaves two Brothers, Jim and Jerry Foley and many Nieces and Nephews. Janet had a strong connection to the homestead and died on the same land she was born on, which was her wish. Memorials may be directed to the Siena Francis House.

Janet Marie Foley, 91 of Blair, passed away June 26, 2019 at her home. Mass of Christian burial will be held at 10:00 am Saturday, June 29, 2019 at St. Francis Borgia Catholic Church in Blair. Burial will follow services in the Holy Cross Cemetery... View Obituary & Service Information

The family of Janet Marie Foley created this Life Tributes page to make it easy to share your memories.

Send flowers to the Foley family.