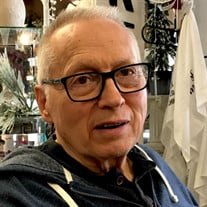 James Clayton Dinsmore, age 77 of Blair, passed away December 9, 2021, at Crowell Home in Blair, NE after a battle with dementia. Services will be held Tuesday, December 14 at 10:00 AM at Hennessey Funeral Home in Missouri Valley, IA. Graveside service will follow at the Grange Cemetery in Honey Creek, IA. Visitation will be held Sunday, Dec. 12 at Campbell Aman Funeral Home in Blair, NE from 6 - 8 PM and Monday, Dec. 13 at Hennessey Funeral Home in Missouri Valley, IA from 5:30 – 8 PM. James was born May 30, 1944 in San Francisco, California. His father was stationed in California with the Navy during WWII. Jim grew up in Missouri Valley, IA and graduated in 1963 from Missouri Valley High School. After school he proudly served in the US Navy on the USS Truckee from 1963-1965, before his honorable discharge. In 1966 he married Jayne Hickey and to this union his two sons were born. They later divorced; he was very devoted to his boys which was one of his greatest joys. He married Linda Ward Ring in 2008 and lived in Blair since 1991. He loved to bowl, play softball, darts, pool and cards. He also enjoyed visiting with friends, traveling, dancing and watching college football. Jim always said “Hello” to everyone and would try to say something to make you laugh. He was a people person. Jim worked at Tamarack Bowl beginning at the age of eight setting bowling pins. His mother and foster mother worked at Tamarack. A few places he was employed were Wisecup Farms in Missouri Valley, Suburban Propane in Missouri Valley and Council Bluffs, Bond Equipment in Logan, Bomgaars, Monsanto and First Lutheran Church in Blair and he also roofed houses on the side for many years. He was a member of the Eagles Club and American Legion. He was a member of First Lutheran Church in Blair. Jim was preceded in death by his parents Donald V. and Phyllis (Rothenay) Dinsmore; brothers Gene and Marvin Dinsmore; grandparents: Charles and Jenny Dinsmore and Frank and Christine Rothenay; foster parents: Duke and Bonnie Voss He is survived by his wife Linda of Blair; sons: Jeff (Sarah) Dinsmore of Council Bluffs and Josh (Traci) Dinsmore of Omaha; stepson Chad (Erin) Ring of Omaha; siblings: Linda (Jerry) Summers and Patty (John) Stueve of Missouri Valley and Randy Dinsmore of Omaha; four grandchildren: Kiley, Ian, Sydney and Colton; one step grandchild William Ring. Jim was a devoted husband and best friend of his wife Linda. Everyone Jim met in his life he considered a friend; he truly will be missed.

James Clayton Dinsmore, age 77 of Blair, passed away December 9, 2021, at Crowell Home in Blair, NE after a battle with dementia. Services will be held Tuesday, December 14 at 10:00 AM at Hennessey Funeral Home in Missouri Valley, IA. Graveside... View Obituary & Service Information

The family of James Clayton Dinsmore created this Life Tributes page to make it easy to share your memories.

Send flowers to the Dinsmore family.