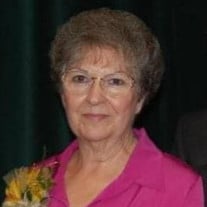 Jacquelyn Leitherer McCandless, 85, passed away peacefully on December 15, 2021, and returned to the arms of her sweetheart and husband of 56 years, Richard. Jacqi, as she is known by all who love her, moved to Blair Nebraska in October of 2020. She was born November 1936 in Chicago Illinois to Oswald Walter Leitherer and Jessie Irene Lemme who both have preceded her in death. Jacqi met Richard Arnold McCandless in 8th grade where the story goes he regularly copied answers from her Spanish tests and passed the class with her help. They dated off and on for several years and finally married in August 1958. They were then sealed for all eternity in the Manti Utah Temple of the Church of Jesus Christ of Latter-day Saints in 1968. They spent many adventurous years together and lived in several different places including Chicago, Illinois, Ft. Lauderdale, Florida, Kirksville, Missouri, Montrose, Iowa, and Hamilton, Illinois. Richard and Jacqi were blessed with five children who are celebrating her life at this time but will miss her dearly every day. Their children are Shannon (Steven) Ward of Blair, Nebraska, Erin (Robert) Turner of Eagle River, Alaska, Kelly (Brenda) McCandles of Rexburg Idaho, Cory McCandless of Keokuk, Iowa, and Meghan McCandless of Grand Rapids, Michigan. Jacqi is also celebrated by eleven grandchildren and ten great-grandchildren. During her time on Earth, Jacqi lived a full life with many unique experiences while developing her extraordinary talents. She drag raced as a teen, gave birth naturally at a time when that was unheard of, organized executives and girls camps, and helped coordinate many activities associated with the Nauvoo Illinois Temple open house. Together, Jacqi and Richard spent many years traveling around the United States while Richard worked the storm team for State Farm Insurance. During that time, they went on many adventures in the areas they visited. They also served in the Nauvoo Temple for several years together after Richard retired from State Farm. After Richard passed away in 2014, Jacqi moved to Grand Rapids, Michigan, and then to Nebraska in 2020. Jacqi loved to learn and was a master teacher. She delighted in sewing and making beautiful, embroidered quilts for family and friends. She was an expert family historian and genealogical researcher. Jacqi served faithfully in many leadership roles as a member of the Church of Jesus Christ of Latter-day Saints in the Young Women and Relief Society organizations. She loved her family, her labradoodle, Murfy, and she will be missed by all who knew her. A simple graveside service will be held on Monday, December 20th, at 2:00 pm at the Nauvoo City Cemetery in Nauvoo, Illinois. Services GRAVESIDE SERVICE Monday December 20, 2021 2:00 PM Nauvoo City Cemetery, Illinois, Nauvoo Send Flowers to Jacquelyn's Graveside Service Guaranteed delivery before the Graveside Service begins

Jacquelyn Leitherer McCandless, 85, passed away peacefully on December 15, 2021, and returned to the arms of her sweetheart and husband of 56 years, Richard. Jacqi, as she is known by all who love her, moved to Blair Nebraska in October of 2020.... View Obituary & Service Information

The family of Jacquelyn McCandless created this Life Tributes page to make it easy to share your memories.

Send flowers to the McCandless family.