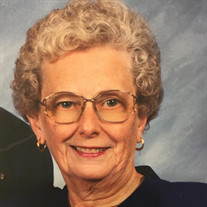 Irma Arlene Arp Holstein, age 86 of Blair, died March 6, 2017 at Brighton Gardens in Omaha, Nebraska. Funeral services will be held Friday March 10, at 10:30 AM at First United Methodist Church in Blair. Graveside services will be held in the Blair Cemetery. Visitation will be Held Thursday at Campbell Aman Funeral Home with family receiving friends from 6:00 to 8:00PM. Irma was born June 9, 1930 to Otto Arp and Ella Kuhr Arp. She grew up with her younger brother Vernon on a farm near Kennard, NE. she went to LeCrone Country School and attended and graduated from Blair High School in 1947. While in High School she met the love of her life Everett Holstein. Everett moved to Arlington but they would see each other at dances and started dating. Everett and Irma were married November 12, 1950 and started their family on the Kennard Home Place. A few years later they moved to a farm west of Blair. Here is where they raised their four children: Cynthia, John, Neil, and Eric. Irma belonged to Extension Club, the Methodist Church and women’s group, Cottonwood Quilters, and the Grange. Her hobbies were quilting and genealogy. Together, she and Everett enjoyed their grandkids activities, Grange community projects and many vacations. In February 2005, they retired from farming but stayed on the farm until the summer of 2014 when they moved to town. In the summer of 2016 they moved again to an apartment in Omaha to be closer to Neil and Eric. She is preceded in death by her parents and parents-in-law; brother Vernon; in-laws Howard and Faye Holstein, Howard and Florence Nelsen, Warren and Ruth Holstein, Hazel and Richard Appleby; grandchildren Kiley Metzler and Jill Swanson. Mrs. Holstein is survived by her husband Everett; children: Cindy and Rick Metzler of Verdigre, John and Mici Holstein of Ft. Dodge, IA, Neil and Kate Holstein, Eric and Lori Holstein of Omaha; grandchildren: Evie Holstein, Amy and Matt Pottorff, Mary Holstein, Lanny Holstein, Martha Holstein, Joshua and Jonah Holstein; seven great grandchildren; sister-in-law Sharon Arp, and many nieces and nephews. Memorials may be directed to First United Methodist Church in Blair.

The family of Irma Arlene Arp Holstein created this Life Tributes page to make it easy to share your memories.