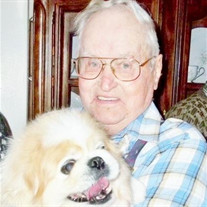 Herman James Lauritsen, age 91 of Blair, passed away September 30, 2017 at Crowell Home in Blair, Nebraska. Funeral services will be held Thursday, October 5, 2017 at 2:00 PM at Campbell Aman Funeral Home in Blair. Graveside services will follow at the Blair Cemetery. Visitation will be held Wednesday from 6 to 8 PM at the funeral home. Herman J. Lauritsen was born on October 19, 1925 in Kennard, the son of Louis and Amanda Lauritsen. He was raised on a farm outside of Kennard, confirmed at Emmaus Lutheran Church in Kennard, and attended school in Kennard. On January 29, 1947, he was united in marriage to Jacqueline M. Dudgeon; after the wedding the couple made their home in Blair. Herman worked on the family farm and traveled with thrashing crews in his younger years. Herman began driving for Sioux Honey, which he was also a member of, and then started his own trucking company. He later primarily farmed and was a migratory beekeeper for many years. Herman always enjoyed traveling with Jacqueline for work and pleasure covering large portions of the United States. He had countless friends that he met over the years from all his travels. Mr. Lauritsen is survived by his children: Brian Lauritsen, Jeff (Linda) Lauritsen, Lucy Lauritsen and Amy Lauritsen; grandchildren: Amanda Lauritsen-Wrieth, Abby (Dan) Olson, Jessica Lauritsen, Cody (Fiancée Brie) Gorsett, Levi Gorsett and Wyatt Laurtisen-Jurek; great grandchildren: Keegan Wrieth, Kinzey Wrieth and Alex Olson; brother Leonard Lauritsen, sister-in-law Elinor Beaver, and his cherished dog Marcel. He was preceded by his parents, wife Jaqueline Lauritsen, brothers: Carl, George and Johann; sister Rena Lange, daughters-in-law Sue Lauritsen and Pam Lauritsen. Memorials may be directed to the Congregational Church of Blair, Blair Volunteer Rescue Squad or the Nebraska Kidney Association.

The family of Herman James Lauritsen created this Life Tributes page to make it easy to share your memories.

Send flowers to the Lauritsen family.