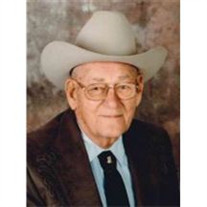 Henry Thomas Smith, known as “Sonny” to his family, friends and community, passed away on June 14, 2015 at 87 years of age. He passed in peace at the place he always loved to be, his cabin on Rush Lake in Ottertail, Minnesota. Visitation will be held Thursday June 18, 2015, with family receiving visitors from 6-8pm at the Campbell-Aman Funeral Home in Blair. Funeral services 1pm on Friday, June 19th at the funeral home. Burial will be at the Blair Cemetery with a luncheon following. Sonny was born on December 14, 1927 in West Point, Nebraska, the oldest of eight to Thomas and Dora (Betts) Smith. He grew up in many towns throughout Nebraska, but landed in Blair, Nebraska where he was married to Ruthene Hugelman on August 21, 1946 and would begin a family of his own. Sonny began his career at Con-E-Co then co-owning his own business of J. & S. Welding And Repair, before returning to Con-E-Co, where he eventually retired in April of 1992 after roughly 30 years. To his family he could be an ornery guy, both tough and resilient on the outside, but a man with a deeply loving and caring heart on the inside. Through his life he enjoyed fishing and hunting and as he got older funny t-shirts, with phrases that always made those around him chuckle. He will be missed by those friends with whom he shared his morning coffee and “double bubble”; and by his family who always cherished the time visiting and spending summers at the lake with him. Sonny was welcomed into heaven by his wife, Ruthene (Hugelman) Smith; parents, Thomas and Dora (Betts) Smith; father and mother-in-law, Leo and Anna (Petersen) Hugelman; sister Dorothy Lorraine “Midge” Rosterman (Smith); brother, Bobby Dean Smith; brother, Andrew Jackson “Jack” Smith; daughter, Gloria Jean “Jeanie” Bock. He is survived and will be dearly missed by his son and daughter-in-law, Lee and Laura (Nebrigich) Smith of Blair, daughter and son-in-law Diana (Smith) and Glenn Nelsen of Blair; son-in-law Don Bock of Blair; sisters and brothers, Helen Behling, Donald “Buck” and Mary Lou Smith, Thomas and Pat Smith, and Jerry and Dee Smith; his seven grandchildren and eight great-grandchildren and many nieces and nephews.

Henry Thomas Smith, known as &#8220;Sonny&#8221; to his family, friends and community, passed away on June 14, 2015 at 87 years of age. He passed in peace at the place he always loved to be, his cabin on Rush Lake in Ottertail, Minnesota. Visitation... View Obituary & Service Information

The family of Henry "Sonny" Smith created this Life Tributes page to make it easy to share your memories.

Henry Thomas Smith, known as “Sonny” to his family, friends and...

Send flowers to the Smith family.