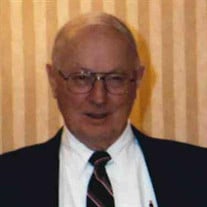 Harold Lee McKercher age 87 of Blair, Nebraska died Saturday, July 9, 2016 at Memorial Community Hospital in Blair, Nebraska. Mass of Christian Burial will be held Saturday, July 16, 2016 at 10:00 AM at St. Francis Borgia Catholic Church in Blair, with Harold’s son Father Mark McKercher serving as celebrant. Visitation will be held Friday at St. Francis Borgia Catholic Church from 5 to 8 PM with Vigil at 7 PM. Harold Lee McKercher was born on March 26, 1929 in Blair, Nebraska the son of Shirley and Geraldine (Metzler) McKercher. He was raised in Blair and graduated from Blair High School in 1946. After high school he proudly served his country in the United States Navy. After being honorably discharged from the navy he attended dana college in Blair and played basketball for the college. On August 9, 1963 Harold was united in marriage to Judith Kroeger in Colorado Springs, Colorado. After graduating from Dana he was a teacher at Friend, Nebraska where he taught math and science, and then began teaching at BeeBeetown, Iowa until the consolidation of three schools into Tri-Center high school, he taught until his retirement in 1993. Harold enjoyed gardening, reading, playing softball in his younger years, and socializing with his friends at the coffee shop and keeping a watchful eye on his good friend Wilbur Clements. He is survived by his wife of 53 years Judith McKercher, his son Father Mark McKercher of Omaha, niece Jerri (Curt) Pederson, grandniece Rachel (Keith) Spader and their daughter Harper, grandnephew Ryan (Anne) Herman and their children Keller and Kinsly, grandniece Katelyn Pederson and special friend Kris Ahrens. He was preceded in death by his parents, son Michael McKercher, sister Phyllis Olsen, and grandniece Amy Herman. Memorials may be directed to the Tri-Center Scholarship Foundation. Services provided by Campbell Aman Funeral Home, Blair.

The family of Harold Lee McKercher created this Life Tributes page to make it easy to share your memories.

Send flowers to the McKercher family.