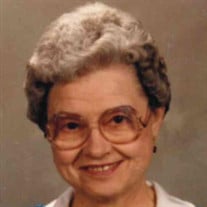 Gracie Jean (Jackson) Husk died on October 4, 2021, at Crowell Home, Blair, NE. Gracie was born May 30, 1922, to John and Gladys (Hovendick) Jackson at their family home near Herman,NE. She attended New England School and graduated from Blair High School in May, 1939. Gracie met the love of her life, Gene Husk, at a local dance. While home on leave from the service, Gene and Gracie were married December 31, 1943. When Gene returned from WWII, they settled in the Herman area where he worked for Hynes Ranch. When the ranch sold, the family moved into Herman. Gracie lived there until she moved into Crowell Home. To this union four children were born, Carole, John, Sharon, and Jacque. Gracie was a devoted wife, mother, grandmother and friend. The highlights of her life were when the family gathered for holidays and other occasions. She worked at Dana College for 25 years, she made many friends with staff and students. Gracie is best known for her piano and organ skills. She played for weddings, funerals, and many community programs for over 50 years. If anyone needed music for any occasion, Gracie was the one to call! Gracie was a member of Eastern Star for almost 80 years, a Legion Auxiliary member over 50 years, a UMW member over 65 years, and a member of the Herman Methodist Church most of her life. She held offices and other leadership positions in all of these groups. Gracie is survived by John (Judy) Husk of Goodyear, AZ, Sharon (Perry) Gydesen of Odell, NE, Jacque Orvis of Norfolk, NE. Grandchildren Amy VanKirk, Julie (Tony) Synovec, Bill (Kristine) VanKirk, Harley VanKirk, Sara (Michelle) Husk, Jason (Anna) Husk, Brian (Jen) Gydesen, Scott (Stacey) Gydesen, Jenny (Luke Edwards) Orvis, 17 great grandchildren, and 5 great, great grandchildren. She is preceded in death by parents John and Gladys Jackson, husband Eugene Husk (1997), daughter and son-in-law Carole and Ronald (Mick) VanKirk, son-in-law Larry Orvis, granddaughter Anne Marie VanKirk, great grandson Dillon Synovec. Celebration of life services will be Monday, October 11, 2 pm at Herman Community Church, burial at Herman Cemetery. Visitation will be 5-7 Sunday at the funeral home. Memorials may be directed to the family for later distribution to local organizations. Services entrusted to Campbell-Aman Funeral Home, Blair, NE.

The family of Gracie Jean Husk created this Life Tributes page to make it easy to share your memories.

Send flowers to the Husk family.