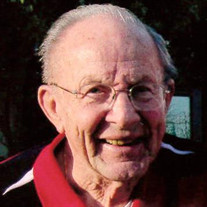 Gene Megrue died Sunday, December 18, 2016, at Memorial Community Hospital in Blair, Nebraska, at the age of 93. He was surrounded by his loved ones. Funeral Service will be held Wednesday, December 21 at First Lutheran Church at 11:00 AM. There will be a private family burial. A public prayer service will be held Tuesday, December 20 at First Lutheran Church at 7:00 PM. Gene was born to Floyd and Clarice Brown Megrue, August 12, 1923, at Scotia, NE. The family moved to Tekamah, NE in 1931. He was baptized at the Presbyterian Church in Tekamah and graduated from Tekamah High School in 1940. Gene attended Dana College for 3 years where he met the love of his life, Betty Korshoj, in 1942. Gene entered the US Navy in 1943 and graduated from midshipman school at Columbia University, NY. He served as a naval officer from 1943-1946 aboard Ship LST 629. He was deployed to the South Pacific during World War II. After the war, Gene returned to Dana and graduated in 1947. Gene married Betty Korshoj at the Danish Lutheran Church in Blair on June 16, 1946, and they enjoyed 70 ½ years together. He became a member of First Lutheran Church on December 14, 1952, and for many years Gene was Treasurer and an Usher at First Lutheran Church. Gene was also a member of the City Council, President and Board Member of the Blair Golf Club, volunteer fireman, member of V.F.W. and American Legion. For 30 years, he worked as an accountant for Korshoj Construction Company. Later he was employed by Harold Wright Construction and John Eriksen Construction until his retirement. Gene enjoyed golfing, traveling, children, grandchildren and great-grandchildren and friends. Gene is survived by his wife, Betty, and four children: Gregory (Kathy) Megrue, Deborah (late Dean) Oleson, Stacia (Mark) Thiessen, Lizbeth (Terry) Smith; grandchildren: Brett (Shelli) Megrue, Lucas (Meredith) Megrue, Joshua Megrue, Jason (April) Oleson, Cody (Christina) Oleson, Rachel (Shawn) Radekin, Levi (Lyndsey) Thiessen, Daniel Thiessen; step-grandchildren: Allison Smith Baca, Autumn (Erik) Knudtson, Audrey (Ryan) Ernst; seven great grandchildren and four step-great grandchildren. Brothers: Jack Megrue, Floyd Megrue, brother-in-law: Frank Korshoj (Carol), sister-in-law: Marilyn (Leonard) Jackson. He was preceded in death by his parents, brother Bill and son-in-law Dean Oleson. In lieu of flowers memorials can be given to First Lutheran Church of Blair, Blair Rescue Squad or MCH Hospice.

Gene Megrue died Sunday, December 18, 2016, at Memorial Community Hospital in Blair, Nebraska, at the age of 93. He was surrounded by his loved ones. Funeral Service will be held Wednesday, December 21 at First Lutheran Church at 11:00 AM. There... View Obituary & Service Information

The family of Gene Megrue created this Life Tributes page to make it easy to share your memories.

Send flowers to the Megrue family.