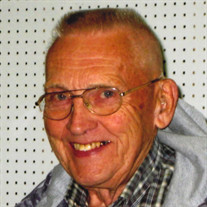 Gayle M. Daehling was born October 18, 1938 on a farm near Staplehurst, Nebraska to Lester and Ella (Swanson) Daehling. He was raised on a farm with his three younger brothers. Gayle attended elementary school at Our Redeemer Lutheran Church, Staplehurst (Marysville) and graduated high school from Seward, Nebraska. Gayle was united in marriage to Ardith C. Wellman on July 2, 1960. To this union they were blessed with three sons, Michael, Brian, & Kevin. His career started with the L.J. Messer Company in Lincoln, NE as an Auto Parts Counterman (sales). His career then took his young family to Omaha, NE with Big A (American Auto Parts Company) as an Inventory Control Manager. Subsequently, he and his family moved to Minneapolis, MN and settled in Tekamah, NE where he and Ardith opened their first store – Town & Country Auto Parts in 1973. In the 90’s, he expanded the business to Blair, NE, In 1997, Gayle and Ardith retired from their auto parts businesses, while maintaining so many meaningful friendships in the Tekamah and Blair communities. After a brief retirement, Gayle returned to work for the Cargill Company in Blair for several years. Gayle and Ardith enjoyed traveling, volunteering at the Blair Recycle Center and being members of Trinity Lutheran Church in Blair. They also enjoyed the friendships they made while wintering in Bullhead City, AZ. Gayle loved fishing with family and friends and the challenge of catching the big one! He always loved interacting with people and attending activities that involved his grandchildren and great-grandchildren. Gayle was preceded in death by his parents Lester in 1962 and Ella in 2006. Gayle is survived by his wife Ardith; sons: Michael (Cindy), Brian (Shannon) and Kevin (Karla); eight grandchildren: Joshua, Zachary, Lucas, Nicholas (Hayley), Samantha (Eduardo) Serrano, Madeline, Andrew and Kameron; four great grandchildren: Ryan, Jayden, Rex and Remy; brothers: Stuart (Pat), Terry (Sandy) and Randall (Patti); brothers and sisters-in-law: MaryAnne (Wayne) Meyer, Betty (John) Treakle and Clark Wellman as well as many nieces, nephews and cousins. Family will be receiving visitors Wednesday from 6-8pm at Campbell-Aman Funeral Home, 444 S. 17th St. Blair, NE. Memorial Services will be held Thursday at 10:30am at Trinity Lutheran Church, 141 S. 20th St Blair, NE.

Gayle M. Daehling was born October 18, 1938 on a farm near Staplehurst, Nebraska to Lester and Ella (Swanson) Daehling. He was raised on a farm with his three younger brothers. Gayle attended elementary school at Our Redeemer Lutheran Church,... View Obituary & Service Information

The family of Gayle M Daehling created this Life Tributes page to make it easy to share your memories.

Send flowers to the Daehling family.