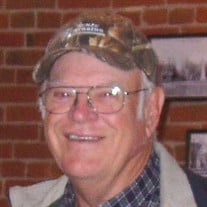 Fredrick Henry Heinssen died October 14, 2017 at Carter Place, Blair, Nebraska at age 79. Funeral services will be held Friday at 10:30AM at First Lutheran Church in Blair. Graveside services will follow in the Blair Cemetery. Visitation will be held Thursday with family receiving friends from 6:00 to 8:00PM at Campbell Aman Funeral Home. He was born on June 29, 1938 to George and Dorothy (Grabbe) Heinssen on the family farm north of Blair. He attened Kindred Country School. In 1956 he graduated from Herman High School. In 1952 he was confirmed into the Lutheran faith at the Emmanuel Lutheran Church at Tekamah. As a young man Fred enjoyed waterskiing on the Missouri River. He also enjoyed hunting, trapping and fishing. On June 25, 1958 he married Betty J. Jensen. From the very first time he took Betty home from a basketball game he only had eyes for her, the love of his life. They enjoyed life together for 59 years. After living 53 years on the family farm 7 miles north of Blair, on January 25, 2011, they moved to Blair into a new condo. Fred was a good father teaching the kids good values for life, playing ball games, running speedy race cars on the living room floor and the safe use of fireworks. He also taught them about new life with little animals on the farm. Fred’s life occupation was spent as a successful grain farmer, also raising cattle and hogs. He served on the Burt County Co-op Board, including serving as president. He served on the Burt-Washington County Drainage District Board. Preceding him in death are his parents, step-grandson Jared B. Borsh, sister-in-law Marian McClusky and brother-in-law, Rev. Stanley T. Hansen. Left to morn him is his wife Betty, two children, Deborah M. Pence and Fredrick H. (Jaqueline) Heinssen Jr. all of Blair. Three grandchildren, Lindsay M. Heinssen, Omaha, Fredrick H. Heinssen lll, and Kenneth D. Pence, Blair, step-granddaughter, Jamie Pierce, Tustin, California. One sister Mary Faith Hansen of Zurick, Illinois. In-laws, Marie Rager, Tekamah; John & Diane Jensen, Herman; Valerie & Terry Peterson, Herman, several nieces, nephews and a host of friends. Memorials may be directed to Herman Volunteer Fire and Rescue, the Washington County Relay For Life or the organization of the donor’s choice.

The family of Fredrick Henry Heinssen created this Life Tributes page to make it easy to share your memories.

Send flowers to the Heinssen family.