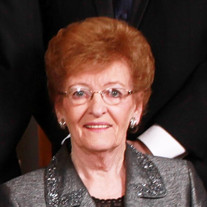 Eunice Faye Swanson was born May 29th, 1937 in Oakland, Nebraska to Ben and Mae (Gillies) Swanson. She was baptized at First Lutheran Church on May 29th, 1938 in Oakland, Nebraska. She graduated from Craig High School on May 20th, 1954. She married Robert Bennett on October 22nd, 1955 in Tucumcari, New Mexico. They welcomed their daughter Kimberly on January 31st, 1958. They moved to Redwood City, California in 1966. Eunice and Kim moved back to Oakland, Nebraska in 1968, before settling in Blair in 1970. She worked at Mutual of Omaha for 25 years in the Accounting Department. She decided to for-go the commute to Omaha and finished out her professional career at Great Plains Communications in Blair in the service center, where she then retired at 62. She enjoyed crocheting, shopping, spending time with her family, and attending as many activities of her grandchildren as she could. She is survived by her daughter, three grandchildren, and seven great-grandchildren: Daughter and son-in-law, Kim and Tim Andersen; Jeremy and Ashley Andersen and their children, Easton and Houston; Marcie and Ben Ellenberger and their children, Aubree and Barrett; and Jarett and Ashley Andersen and their children, Haley, Eli, and Kasey. She is preceded in death by her parents, Ben and Mae Swanson, her sister and brother-in-law Helen and Dorlin Drieling, and her brother Carl Svensson of Sweden. Services will be held at 10:30 a.m. Friday November 22nd at Campbell Aman Funeral Home in Blair. A luncheon will be held at the Blair Legion immediately following the service. Burial will be at the Oakland Cemetery following the luncheon. Visitation will be Thursday November 21st, at Campbell Aman Funeral Home with the family receiving friends from 6 to 8 p.m. Memorials may be directed to The Kennard Volunteer Rescue Squad.

The family of Eunice F Swanson created this Life Tributes page to make it easy to share your memories.

Send flowers to the Swanson family.