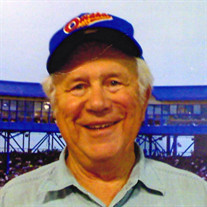 Eugene Lee Meyer passed away Friday, July 14, 2017. ALS (Lou Gehrig’s Disease) found a tough competitor in Gene. He fought his battle with conventional as well as holistic medicine, maintaining his kind heart and sense of humor. In lieu of flowers, please consider a donation to the Mid America ALS Society or Oaks Indian Mission. Gene was born in Toledo, Ohio, March 22, 1934 to Lois and Adelbert Meyer. He graduated in 1952 from Woodville High School in Woodville, Ohio. Gene began college at Capital University in Columbus, Ohio. His education was put on hold while he proudly served our country in the United States Army as an Army Security Agency Specialist. Upon discharge he returned to Capital University and in 1958 obtained his Bachelor in Arts Degree with an Economics Major. He also attended Ohio State University studying guidance and counseling. Gene married his sweetheart, Susie Puckett, on August 26, 1956 in Columbus, Ohio. Gene began his career at Capital University as a Student Recruiter/Admissions Counselor and then Director of Alumni Relations. He then served as the first Alumni Relations Director at California Lutheran in Thousand Oaks, California; vice president of Development at Brenau College in Gainesville, Georgia; Executive Director of College Relations at Dana College. In 1983 Gene expanded his scope of development work to include Executive Director of Lutheran Health Services Foundation and Children’s Hospital Foundation, both in Omaha; and Martin Lutheran Home in Lincoln. After retirement in 1999, Gene worked as a consultant with Gronlund Sayther Brunkow providing fundraising and development services for various charities and religious organizations. Gene was certified as a fundraising executive, was a Fellow of Healthcare in Philanthropy and accredited with the Association of Lutheran Development Executives. Gene served on many boards and organizations most notably the Blair Lion’s Club, Blair Airport Authority, served in many roles at First Lutheran Church in Blair, and over 25 years as a Director on the board of the Oaks Indian Mission in Oaks, Oklahoma. Gene enjoyed many hobbies with the greatest wheeling and dealing with classic cars. Gene’s most prized possession was a 1954 Darrin convertible. Gene joins daughter, Carol, in heaven, along with his parents. He is survived by his wife Susie of 60 years; son Duane (Jill) of Wausau, WI; son Kevin of Surprise, AZ; daughter Lynda Lewis of Vancouver, BC; and grandchildren: Gwen Meyer (Alex Howbert), Brad Meyer, Asher Meyer, Joelle Lewis, and Susanna Lewis. Gene is also survived by his siblings, sister Jan, brother Bob and their extended families with whom he shared many wonderful memories.

The family of Eugene "Gene" Lee Meyer created this Life Tributes page to make it easy to share your memories.

Send flowers to the Meyer family.