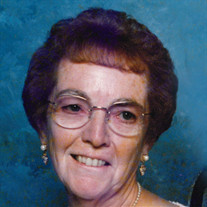 Erna Marie Hawley, age 86, passed away October 14, 2017, at the home of her granddaughter, in Elkhorn, Nebraska, where Erna had resided for the past year. Funeral services will be held Thursday, October 19th at 2:30 p.m., at United Methodist Church in Blair, Nebraska, with graveside services following in the Blair Cemetery. Visitation will be held Wednesday evening, 6-8 p.m. at the Campbell Aman Funeral Home. Erna Marie Hawley was born August 21, 1931 to Earl and Erna (Metzler) Hampton on a farm east of Tekamah, Nebraska. She attended country grade school and later graduated from Tekamah High School. After graduating from high school, she moved to Blair with her family where she became an Optometric Assistant for Dr. Keith Finn. After “Doc Finn” passed away, she continued working for his son, Dr. Gary Finn. She retired after 38 years, in 1995. Erna was united in marriage in 1962 to Todd Miller who passed away in 1974. In 1976 she married Gerald Kenneth McIntosh, Sr., who passed away in 1988. After retiring in 1995 she was united in marriage to Russell Hawley and they spent their retirement years traveling to Arizona for the winter, to the Northwest in the spring, and returning to Blair to spend the summer months. Russell passed away in 2007. Erna belonged to the First United Methodist Church in Blair for 53 years. She served as Chairman of her circle and as treasurer of the church for a number of years. She was a Past Madam President of the Blair Eagles Auxiliary #3215, which consolidated with the Elkhorn Auxiliary #3943 in 2012, and a 50-year member of the Royal Neighbors of America. Erna loved crocheting and knitting. Over the years she made many items for her beloved family. Erna had no children of her own, but she was blessed with a large family; survived by her sons, David (Cheryl Walsh) Hawley and George McIntosh, daughter, Deb (Darrell) Boyce, sons-in-law, Alfred Metzer and Arnold Nordstrom, daughter-in-law, Kathy McIntosh, 26 grandchildren, numerous great and great-great grandchildren, and sisters-in-law, Donna Hill and Karean (Al) Derby. She was preceded in death by her parents, infant brother, her husbands, and, sons, Gerald McIntosh, Jr. and Russell Jon Hawley, daughters, Bernice Miller-Breckenridge, Leona Miller-Loerch, Mary Lou “Sally” Miller-Tobin, Geraldine McIntosh-Metzler, Irene McIntosh-Nordstrom, Merianne Hawley, and Roberta Hawley-Fegan, and daughter-in-law, Ulrike McIntosh, 3 grandchildren, and brothers-in-law, Allen (Jan) Hawley and Warren Hill.

Erna Marie Hawley, age 86, passed away October 14, 2017, at the home of her granddaughter, in Elkhorn, Nebraska, where Erna had resided for the past year. Funeral services will be held Thursday, October 19th at 2:30 p.m., at United Methodist... View Obituary & Service Information

The family of Erna Marie Hawley created this Life Tributes page to make it easy to share your memories.

Send flowers to the Hawley family.