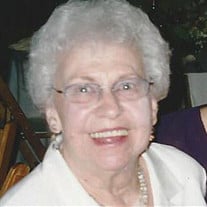 Erma Irene Holstein Suverkrubbe, long-time resident of the Blair area, passed away at the age of 95 on Wednesday, January 20, 2016. A Funeral service will be held Wednesday, January 27th at 1:00 PM at First Lutheran Church in Blair with burial following at the Blair Cemetery. Visitation will be Tuesday, January 26th at Campbell~Aman Funeral Home from 3-8 PM with family receiving friends from 6-8 PM. Erma Irene Holstein Suverkrubbe was born December 2nd, 1920 on the family farm near Bennington, Nebraska, the youngest of four children of Sam and Mary Holstein. She attended Washington Elementary and graduated from Bennington High, then attended the University of Nebraska. She briefly taught school when she was only a few years older than her oldest students. Erma married George Suverkrubbe in 1942. Following his basic training she accompanied him to Fort Worth, Texas until his deployment overseas in World War II. At that time, she returned to Nebraska to live with her parents and found work as a streetcar driver in Omaha. Their first child Larry, was born while George was overseas. Within three years of marriage, new bride, small child, husband gone in the war. When George returned from the war, Larry now three years old, four additional children were born, Barbara, Lois, Randy, and late son Daniel. George and Erma moved to a farm south of Blair, where they lived for nearly 50 years. One muddy spring, while she was carrying a baby in her arms, Erma got her feet stuck in the mud and hollered and laughed all the way from the car to the sidewalk as she walked out of first her boots then her shoes. Erma was good with number and details, making an excellent bookkeeper…kept all the farm records. Being detail oriented, she also designed her own home. Erma was a “no nonsense” woman being very efficient and was also innovative. She is survived by a son, Larry (Barbara nee Stirek); daughter, Barbara (Ted) Killham; and daughter, Lois (Richard) Johnson; 4 grandsons, 3 granddaughters, and 13 great-grandchildren. She was preceded in death by her husband, George, and two sons, Randall and Daniel. Memorials may be directed to the First Lutheran Church of Blair in Erma’s name.

Erma Irene Holstein Suverkrubbe, long-time resident of the Blair area, passed away at the age of 95 on Wednesday, January 20, 2016. A Funeral service will be held Wednesday, January 27th at 1:00 PM at First Lutheran Church in Blair with burial... View Obituary & Service Information

The family of Erma Irene (Holstein) Suverkrubbe created this Life Tributes page to make it easy to share your memories.