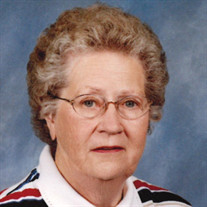 Elsie K. Nielsen, age 91 of Blair, Nebraska , passed away September 1, 2018 at her home in Blair. Funeral services will be held Thursday September 6 at 10:30AM at First Lutheran Church in Blair. Graveside services will follow in the Blair Cemetery. Visitation will be held Wednesday September 5, with family receiving friends from 6:00 to 8:00PM at Campbell Aman Funeral Home in Blair. Elsie Katherine Kastrup was born March 4, 1927 on a farm in Dixon County Nebraska to Edmund and Karen (Andersen) Kastrup. She was baptized September 18, 1927 by Pastor A.N. Skanderup and confirmed July 14, 1940 by Pastor Knud Larsen; in the Danish Lutheran Church in Laurel. She graduated from Laurel High School in 1944 and received a teaching certificate from Dana College in Blair in 1945. She taught country school at Brewster School from 1945-1947, then at McCarthy School from 1947-1949. She married Lloyd J. Nielsen on May 29, 1948 at the Gethsemane Lutheran Church in Laurel. To this union were born four children; Ronald, Donald, David, and Karen. They raised their family on the Nielsen family farm West of Blair. After the children were grown, she worked for Blair Schools as a paraprofessional in the reading room for 21 years. She loved her family and spending time with them. She enjoyed baking and cooking; and then hosting a crowd to eat it all for her. She especially enjoyed entertaining and celebrating during the Christmas season. She enjoyed her flowers and working in the yard. Over the years, they always had a wealth of friends they spent time with. For many years they were part of a neighborhood card club where many hands were dealt, stories shared, and laughs had. She held her grandchildren and great-grandchildren in a special place in her heart. Her roles of grandmother and great-grandmother were ones she filled with passion. She knew her best life’s work was in the family she created and nurtured through her years. She is preceded in death by her husband Lloyd, on May 20, 1999, her parents, brothers Kai, Carlo, Thorkild, Leo, and Robert. Sisters in law Mabel, Millie, Lorraine, and Julie Kastrup. Sisters in law and spouses Erma and Marlin Taylor, Roma and Bill Randall, and Darlene and Frank Gleeson. Survived by her children Ronald (Karen) of Lincoln, Donald (Debra) of Rosemount, Minn., David (Nancy) and Karen (Bruce) Camenzind, all of Blair. Twelve grandchildren; Anna (Dan) Janke of Norfolk and their children Noah and Evelyn, Marc (Nichole) Nielsen of Elko-New Market, Minn. and their children Declan and Thork, Jason Nielsen of Thousand Oaks, Calif., Emily (Troy) Holm of Blair and their children Hayden, Barrett, Dalton, Justin, Kenny, and David, Christy (Mitchell) Chappelear of Blair and their children Lavyn and Roman, Gretchen (Derek) Miller of Lincoln and their children Noah and Harvey, James (Aubrey) Nielsen of Blair and their son Gus, Carly Nielsen (Dane) of Blair, Cody, Andrew, and Bryan Camenzind all of Blair, and Kristy Brumback of Des Moines. Sister Ruth (Bob) Kenaley of Le Mars, Iowa, brother Borge (Carol) Kastrup of Laurel, and sister in law BonnaDel Kastrup of Sioux Falls, South Dakota. As well as many loving nieces and nephews. Memorials may be directed to the Blair Rescue Squad, First Lutheran Church in Blair, the Blair Public Library or the organization of the donor’s choice.

Elsie K. Nielsen, age 91 of Blair, Nebraska , passed away September 1, 2018 at her home in Blair. Funeral services will be held Thursday September 6 at 10:30AM at First Lutheran Church in Blair. Graveside services will follow in the Blair... View Obituary & Service Information

The family of Elsie K Nielsen created this Life Tributes page to make it easy to share your memories.