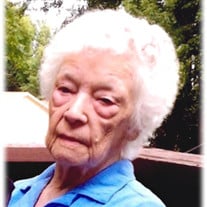 Elsie Marie Jones Moore age 95 of Blair Nebraska has returned to God & her loved ones that have gone before her on October 8, 2017. Memorial services will be held Friday October 13, 2017 at 11:00 AM at Campbell Aman Funeral Home. She was... View Obituary & Service Information

The family of Elsie Marie Moore created this Life Tributes page to make it easy to share your memories.

Send flowers to the Moore family.