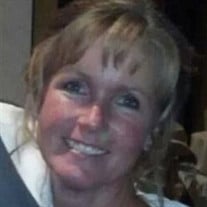 Elizabeth “Sue” Mahr, age 55 of Blair, passed away November 11, 2016 at her home in Blair. A memorial service will be held Wednesday at 7:00 PM at Campbell Aman Funeral Home in Blair, the family will be receiving friends from 6:00 to 8:00PM that evening. Elizabeth “Sue” Mahr was born on March 6, 1961 in Sanford, North Carolina, the daughter of Ray and Ellen Douglas. She attended school in North Carolina before moving with her family to Nebraska at the age of 9. She later attended North High School in Omaha, Nebraska. After high school Sue was blessed with 2 sons. On June 11, 1982, she was united in marriage to Victor Mahr at Trinity Church in Omaha, Nebraska and welcomed a daughter, and later the couple was blessed with another son. The couple moved to Blair in 1986 making the community their permanent home. She worked for 26 Years at First Data in multiple different positions. Sue enjoyed gardening, cooking, all her pets, being an active member in her local church, and especially spending time with her family. Mrs. Mahr is survived by her husband Victor Mahr of Blair, daughter Missy (Kenny) Sedlak of Plattsmouth, sons; Kerry Burrineau of Omaha, Randy Barrineau of Blair, and Chris (Amy) Mahr of Omaha, grandchildren Hayden and Riley Sedlak and another grandchild on the way, her mother Joyce (Carl) Stonerook of Omaha, brothers; Edward (Jan) Douglas of Sanford, North Carolina, Mark Douglas of Blair and Richard Douglas of Omaha, and many extended family members.

The family of Elizabeth Suzanne Mahr created this Life Tributes page to make it easy to share your memories.

Send flowers to the Mahr family.