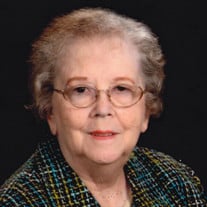 Eldora Gentzler, 88 of Blair, passed away peacefully on May 11, 2018. Funeral services will be held at First Lutheran Church Monday May, 14, at 10:30AM. Graveside services will be held Tuesday May 15 at 1:00PM at the Grimton Cemetery, west of Verdigre, Nebraska. Visitation will be held Sunday May 13 at Campbell Aman Funeral Home with family receiving friends from 6:00 to 8:00PM. Eldora was born on the fourth of July 1929 to Lloyd and Loula (Hines) Hamilton on the family farm near Venus, Nebraska. She attended grades one through eight at the Grimton School in Western Knox County, and graduated from Creighton High School in 1946. At age 16, she signed a contract to teach in a one-room rural school. On August 20, 1950 she married Dale Gentzler. Dale was employed by C&NW Railroad. They moved throughout Nebraska in their travel trailer for a year as Dale worked as a substitute depot agent, before being located in Blair. From Blair, they moved to Clarkson, Nebraska, where they purchased the Clarkson Sundries store and raised their two daughters. The Gentzler family was instrumental in creating and promoting the Clarkson Czech Festival. In 1969, they moved to Blair where Dale was employed by the Enterprise and Pilot Tribune newspaper. Eldora worked for several businesses including a pharmacy, podiatrist, school, carpet store, lawyer and two nursing homes before retiring. Their daughters, Christine and Patricia graduated from Blair High School and the University of Nebraska. Chris married John Wiegers in 1975 and Pat married Dr. Lyn Graves in 1981. Eldora had many activities and interests including genealogy research, china painting, antique collecting and spoiling her grandchildren. She taught pre-school at First Lutheran Church in Blair for many, many years. Their six grandchildren are Andrea (Ivan) Haas, Carly (Kyle) Parrish, Jay J. (Laura) Graves, Logan Graves, Katie Graves and Delaney (Tim) Marine. Great grandchildren are Violet Haas, Natalie Parrish, Landon Parrish, Winnie Graves and Taryn Graves. Eldora was preceded in death by her parents, brothers Elven and David Hamilton, sister Bonna Barner, brothers-in-law Lyle Stingley, Gordon Gentzler and Darrell Barner, sisters-in-law Elvira Hamilton and Audrey Gentzler. Her survivors are husband Dale, her children, grandchildren and great grandchildren, sister-in-law Leola Stingley, Marie Hamilton, Beverly Gentzler and Alice Gentzler, brothers-in-law Stanley Gentzler and Roger Gentzler. Memorial gifts may be directed to First Lutheran Church in Blair.

The family of Eldora Ann Gentzler created this Life Tributes page to make it easy to share your memories.

Send flowers to the Gentzler family.