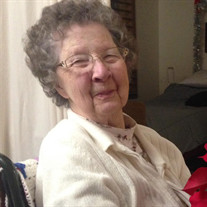 Elda Mae Misfeldt, 88 of Blair, passed February 2, 2017 at Good Shepherd Lutheran Home. Funeral services will be Monday, February 6, 2017 at 10:30 AM at First Lutheran Church in Blair, burial will follow at the Blair Cemetery. Visitation will be held Sunday from 1 to 5 PM at Campbell Aman Funeral Home with family receiving friends from 2 to 4 PM. Elda was born on the family farm near Bennington, NE on January 11, 1929, the daughter of Otto and Meta (Neuhaus) Behrendt. She graduated from Elkhorn High School in 1946. She married Wayne D. Misfeldt on April 16, 1950 in Bennington, NE and they made their home in Blair, NE. Elda has been a resident at Good Shepherd’s Lutheran Community for the past few years. Elda was a file clerk at Mutual of Omaha, homemaker, lunch lady in the Blair School System, an in-home companion and care-giver. She volunteered at Blair Memorial Hospital and area nursing homes, was a Car-Go driver, and was available to her many friends and acquaintances if they needed assistance. Elda loved music and was in the choir at the Good Shepherd’s Lutheran Community. She was an active member of First Lutheran Church as a Sunday and Bible School teacher, Circle member, and served at many church events. Elda belonged to two clubs for over 60 years: U-Name Us Pinochle Club and Baker’s Dozen Extension Club. She enjoyed having coffee with her many friends, which always included a plate of cookies or coffee cake! Her greatest joy in life was being surrounded by her family and she attended as many family events as possible. She is survived by her children; Kathleen (Jeffrey) Buker, of Leavenworth, KS, Merri Misfeldt of Fremont, NE, Patricia (Lane) Rogers of Blair, NE and Martin (Kathleen) of Blair, NE; Grandchildren Mitchel Misfeldt, Avery Misfeldt, Madeline Misfeldt, Megan (Andy) Buker Ross and their daughters, Audrey and Olivia, and Erin (Blake) Buker Dickerson and their newborn twin sons Logan and Tyler; sister-in-law Margaret Behrendt; several cousins, nieces, nephews, and many friends. Elda is preceded in death by her husband, Wayne D. Misfeldt; parents, Otto and Meta Behrendt, sisters Ethel (Clarence) Schneider and Roma (Richard) Lamp; and brother Arthur Behrendt, and two infant sisters. Memorials may be directed to Shepherd’s Village in Blair, NE, TV Ministry at First Lutheran Church in Blair, NE, and Blair Fire and Rescue.

Elda Mae Misfeldt, 88 of Blair, passed February 2, 2017 at Good Shepherd Lutheran Home. Funeral services will be Monday, February 6, 2017 at 10:30 AM at First Lutheran Church in Blair, burial will follow at the Blair Cemetery. Visitation will... View Obituary & Service Information

The family of Elda Mae Misfeldt created this Life Tributes page to make it easy to share your memories.

Send flowers to the Misfeldt family.