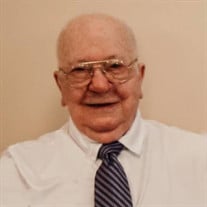 Donald Wayne Warner, Sr. 88, entered the gates of Heaven to join his loving wife Bernice, on July 7,2021 at his home in Blair, NE. Donald was born in Iowa City, IA on August 24,1932 to Lewis E. and Opal(Fulton) Warner. Don spent his childhood in Leon, IA, Omaha, NE and Washington State. Don had one brother, Lorrell & 2 sisters, Rosemary McGahuey, & Barbara Prothro. Don joined the Army at the age of 15 and was stationed to Japan following W.W. II. When they discovered his young age, he was shipped back to the states with an honorable discharge. In 1949, he wanted to go back to serve with his army unit, but Bernice asks him not to go. So, in August of 1949, he enlisted in the Air Force and was stationed in Texas, Illinois and Kansas. This decision saved his life, since his whole unit did not survive, the Korean War. On Sept 24,1949, he married the love of his life, Bernice Herman. To this loving union 5 children were born: Donald (Sharron) Warner Jr., Diana (Bill) Hutcheson, Larry (Patty) Warner, Cheryl (Dave) Japp, Linda (Tom) White. Donald and Bernice started their married life together in Shenandoah, Iowa. They settled in Wichita, Kansas, where they both worked for Boeing Aircraft Company, working on B-52 bombers. In 1960, they moved to a farm by Bennington, NE. where both took a job with Western Electric. After 2 years, Don got a job with Continental Can Company, where he worked for 28 years. In 2013, they left the Bennington area and most recently resided in Blair. After the sudden loss of his wife, Bernice, of 72 years. He found himself struggling to live a life without her. But through God’s design, he was united once again to spend eternity with the love of his life! Don is survived by his five children and in-laws, 16 grandchildren, 29 great grandchildren, 4 sisters-in-law, care-taker Currie Duysen, and many other family and friends. Visitation will be held at Campbell Aman Funeral Home in Blair on Monday, July 12, from 11:00 AM to 1:00 PM with family present. Funeral services will follow at 1:00 PM at the funeral home. Graveisde services with Military honors will be held at Prairie View Cemetery following the service. A luncheon will be held following the graveside service at 844 Meadow Drive, Blair, NE.

Donald Wayne Warner, Sr. 88, entered the gates of Heaven to join his loving wife Bernice, on July 7,2021 at his home in Blair, NE. Donald was born in Iowa City, IA on August 24,1932 to Lewis E. and Opal(Fulton) Warner. Don spent his childhood... View Obituary & Service Information

The family of Donald Wayne Warner Sr. created this Life Tributes page to make it easy to share your memories.

Send flowers to the Warner family.