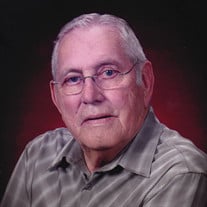 Don Conrad, 90, of Blair, died April 19, 2018. A Mass of Christian burial will be held at 10 a.m. Monday, April 23, 2018 at St. Francis Borgia Catholic Church in Blair. Interment will be in Blair's Holy Cross Cemetery. Visitation will be held Sunday, April 22 beginning at 3 pm with family receiving friends from 5 to 7 PM with a rosary at 7:00 PM at Campbell Aman Funeral Home. Don Conrad was born February 14, 1928, in Cedar Bluffs, Nebraska to AJ & Mabel Conrad. He lived his entire life in the Blair area, attending and graduating from Blair High School in 1945. He enlisted into the US Navy in 1946. Following his service, he went to work for his family business Fairway Oil Co. He continued to work and own Fairway for 40 years. He owned and operated the Plumtree Lounge for 10 years. He worked for Sapp Bros Truck Sales in Omaha for several years. On Aug. 20, 1949, he married Lila Svendgard at St. Francis Borgia Catholic Church. Mr. Conrad was a member of St. Francis Borgia for 86 years, where he was active in the Knights of Columbus. He was elected to the Blair City Council in 1960 and served for 9 years. In 1975 Governor Jim Exon appointed him to the Nebraska Educational Telecommunications Commission. He was a member of the Blair Fire Department, Nebraska LP Gas Association, Nebraska Petroleum Marketers Association and lifetime member of the American Legion Post 154. In 1990 he was inducted into the Nebraska Softball Hall of Fame. He sponsored the Fairway Girls Softball Team for 14 years. During that time his teams competed in five national tournaments, plus numerous regional and state competitions. Don enjoyed traveling across the country with the team, their families and friends. The Conrad’s were members of a pinochle club for more than 50 years. Don loved hunting, farming and road trips especially to the Niobrara. He was politically active for most of his life and was an avid volunteer for Senator Bob Kerrey, Senator Ben Nelson and State Senator Matt Conneally. On April 21, 2012, he married Sue Stears at St. Francis Borgia Catholic Church. He is survived by his wife, Sue Conrad; five daughters and sons-in-law: Ann and Skeeter Therkelsen of Blair, Marilyn and Mike Thompson of Houston, Texas, Nancy and Patrick Murphy of Omaha, Carolyn and Jeff Young of Blair and Sara Conrad of Washington, D.C.; two sons and daughters-in-law: Terry and Kim Conrad of Blair and Jim and Christy Conrad of Fremont; one sister Donna Foley of Omaha; 11 grandchildren and 9 great grandchildren. He was preceded in death by his wife Lila, parents AJ & Mabel Conrad. Memorials are suggested to Blair Fire & Rescue Squad or St. Francis Borgia Catholic Church. Campbell-Aman Funeral Home in Blair is in charge of arrangements.

Don Conrad, 90, of Blair, died April 19, 2018. A Mass of Christian burial will be held at 10 a.m. Monday, April 23, 2018 at St. Francis Borgia Catholic Church in Blair. Interment will be in Blair's Holy Cross Cemetery. Visitation will be held... View Obituary & Service Information

The family of Donald Joseph Conrad created this Life Tributes page to make it easy to share your memories.

Send flowers to the Conrad family.