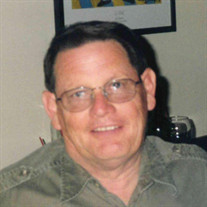 Donald Eugene Beck, age 76, went to his eternal home on November 1, 2020, at the Blair Memorial Community Hospital surrounded by family. It has been said that Don was “Blair’s oldest teenager” with his forever-young, fun and carefree attitude, and appreciation for loud music as he cruised Blair in one of his many cars he owned throughout his life. He lived an amusing, happy-go-lucky life with many close friends who all appreciated his ability to make you smile or laugh. He enjoyed starting conversation with strangers and leaving as new friends. He was born on June 2, 1944 to Harry and Mildred Beck. He graduated from Blair High School in 1962. He was drafted into the Army in June 1965 where he completed basic training at Fort Leonard Wood, Missouri and went on to serve in Germany. In 1968 he joined the Navy. Afterwards, he worked as an electrician for Corky Hayes Electrical. In 1976, he joined HunTel Communication as an installer, troubleshooter, and payphone repairman. After HunTel was bought out, he continued to work for American Broadband as a head locator. He retired in 2014. Don was known for his customer service, always helping people especially after-hours or on the weekends when there were problems. He married Margaret Lammers in 1971 and they had one child, Jennifer. They later divorced. He grew up in the Baptist church, attended the Methodist church for a number of years, and enjoyed attending County Bible Church with his family for many years. He was a believer in our Lord. Don was a member of the Blair Volunteer Fire and Rescue Department for 43 years. In his retirement, he volunteered at the Blair hospital main entrance greeting guests as well as driving cars for Sid Dillon. For over 25 years he enjoyed coordinating the annual Blair Fireworks Show. He spearheaded the collection of donations, planning and shooting the show at Neihart Park and then later at Blair High School. Up until 2 years ago, he collected donations to ensure our community had a fabulous show celebrating America. Don was known for being a truck/car guy and was always trading vehicles and making them nicer than when he got them. As a single guy, many wondered why he always had two or three vehicles at the same time. Of the 89 vehicles he owned in his lifetime, they were all immaculate and spotless. The light of his life was his granddaughter Caitlyn. He adored her and bragged to everyone he met. He found joy watching her in sports, going to her music events, taking her to school, and spoiling her. Don is preceded in death by his parents, Harry and Mildred, brother-in-law Robert Taylor, and one nephew. Don is survived by his daughter Jennifer (Heath) Reyzlik of Blair, granddaughter Caitlyn Haggstrom, sister Patricia Taylor of Fremont, and many nieces and nephews. Please join us in celebrating his life on Friday, November 6, at 10:30am, at Reach Church (formerly Country Bible Church) in Blair, NE. Visitation will be held Thursday from 2:00 to 7:00PM with family receiving friends from 5:00-7:00PM at Campbell Aman Funeral Home. Charitable donations can be sent to Blair Fine Arts Booster Club or Jeanette Hunt Animal Shelter. Arrangements by Campbell-Aman Funeral Home.

Donald Eugene Beck, age 76, went to his eternal home on November 1, 2020, at the Blair Memorial Community Hospital surrounded by family. It has been said that Don was &#8220;Blair&#8217;s oldest teenager&#8221; with his forever-young, fun and... View Obituary & Service Information

The family of Donald E. Beck created this Life Tributes page to make it easy to share your memories.

Send flowers to the Beck family.