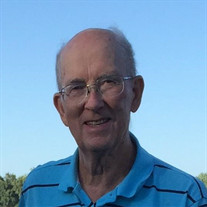 David J. Carlsen, age 78 of Blair, passed away August 7, 2017 at Memorial Community Hospital in Blair, Nebraska. Funeral Services will be held Saturday, August 12, 2017 at 11:00 AM at First Lutheran Church in Blair, Nebraska. Graveside services will follow at the Blair Cemetery. Visitation will be held Friday, August 11th with family receiving friends from 6-8 PM at Campbell-Aman Funeral Home in Blair. The family invites those who have sung with David, or were in one of his choirs to join in a combined choir for the service. If you would like to sing in the choir, please arrive for a 10:00 AM rehearsal at First Lutheran. Memorials suggested to the American Heart Association, First Lutheran Church in Blair, Nebraska; Kountze Memorial Lutheran Church Music Department in Omaha, Nebraska, or the Blair High School Vocal Department. David Jørgen Carlsen was born in Blair, Nebraska on January 13, 1939, the son of Viggo and Viola Carlsen. He graduated from Benson High School in Omaha in 1956. He went on to receive a BFA from the University of Omaha in 1960 and a MM in music theory and composition from the University of Nebraska at Lincoln. In 1960 he was married to Lois J. Chase at Pearl Methodist Church in Omaha, Nebraska. David spent several years teaching vocal music in Missouri Valley, Iowa, and Technical High School in Omaha, Nebraska. The majority of his teaching career was in Blair, Nebraska, where he was the 7-12th grade vocal music teacher for 29 years. David was a church choir director for over 30 years at First Lutheran Church in Blair, Nebraska, and over 10 years as a church musician at Kountze Memorial Lutheran Church in Omaha, Nebraska. After retiring from teaching, he started his own piano tuning business. He was also active in the music community in the Omaha area. He was the director of the Melody Men and a founding member of the Blair Area Community Band in Blair, Nebraska, and was a chorus member of the Voices of Mel Olson, Die Meistersingers and Soli Deo Gloria Cantorum of Omaha, Nebraska. David loved spending time with his family, attending his grandchildren’s events, golfing, going to his coffee group and Lion’s Club, playing Bridge, traveling, reading, watching Nebraska Football and the Chicago Cubs and all things musical. He is preceded in death by his parents, Viggo and Viola Carlsen. David leaves behind his beloved wife Lois; his daughters Janet (Chuck) Campbell and Barbara Carlsen of Omaha, Nebraska; and his son, Douglas (Naoko) Chase Carlsen of Excelsior, Minnesota; and his much loved grandchildren Nicole and Charlie Campbell. He also leaves two sisters, Ellen Ellick and Norma Glodas both of St. Louis, Missouri; niece Genevieve (Jason) Fridley of Syracuse, New York; grandnieces Echo and Sadie Fridley; cherished extend family and wonderful friends.

The family of David J Carlsen created this Life Tributes page to make it easy to share your memories.

Send flowers to the Carlsen family.