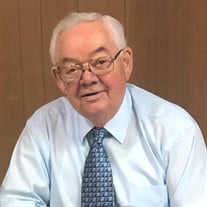 Daryl Keith Miller was born on January 29, 1932 to Leo and Elna Rasmussen Miller. He passed away peacefully August 10th at Memorial Community Hospital. Daryl attended Blair High School and Milford Trade School. He was baptized and confirmed in the First Lutheran Church in Blair. He was drafted into the army (Korean War) in 1952 and was honorably discharged in 1954. On 4-4-54 he was married to his high school sweetheart and the love of his life, Janice Reeves. They were blessed with three children, Debra, Mark and Chris. He owned Miller TV Service which grew into Miller-Rolland Furniture & Appliances and later Miller Home Furnishings. He was a charter member of Blair Rescue Squad, member of the Blair Fire Department, Chamber of Commerce, Lifetime Member of the American Legion #154 and VFW #1251. He also was County Supervisor for 12 years. Daryl enjoyed boating on the Missouri river, his many trips to Canada fishing, camping, hunting, playing cards and his coﬀee groups. Daryl loved people and never met a stranger. He especially loved his family and always told them he was so proud of them. He is survived by his wife of 67 years, Janice; children: Debra (Tim) Gross, Mark (Robin) Miller, Chris (Shelly) Miller; grandchildren: Emily Gross, Bailey (Mark) Vanzee, Abby Gross, Danielle (Lidman) Presentacion, Paige, Cayden and Chase Miller; and 7 great grandchildren with one on the way. He is also survived by his niece, Rochelle and nephews David & Bob. He was preceded in death by his parents, brother Dale, sisters-in-law Sharon and Eunice, brothers-in-law Ed and Max and nephew Todd. Service will be held at 10:30 AM, Saturday, August 14, 2021 at First Lutheran Church. Visitation will be held Friday August 13, from 4 to 8 PM with family receiving friends from 6 to 8 PM at Campbell Aman Funeral Home. Memorials may be directed to the Blair Rescue Squad.

The family of Daryl Keith Miller created this Life Tributes page to make it easy to share your memories.

Send flowers to the Miller family.