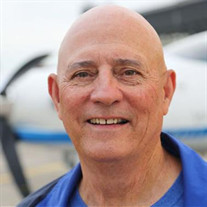 Daryl Eugene Ingalsbe, 67 of Blair, lost his life in a plane crash in Florida on December 27th, 2016. Mass of Christian burial will be Saturday, January 7, 2017 at 10:00 AM at St. Francis Borgia Catholic Church with graveside services following at Holy Cross Cemetery in Blair. Visitation will be held Friday, January 6 at Campbell Aman Funeral Home with the family receiving friends from 6 to 8 PM. Daryl Eugene Ingalsbe was born on May 1st, 1949 to Howard and Lucia Ingalsbe of Battle Creek, NE. He lost his life in a plane crash in Florida on December 27th, 2016. He was a 1967 graduate of Battle Creek High school, then entered the US Army and served his country from May of 1968 through May of 1971. He worked for Northwestern Bell until 1985 when he started his own company, Independent Technologies Corporation. In 2015, ITC celebrated its 30-year anniversary, an extremely proud accomplishment for him. Daryl obtained his pilot’s license in 1992 and flew all over the country for business and pleasure. He was an early owner in the EPIC aircraft company, and built his own EPIC LT in 2009, and that was one of the things he was most proud of. Most recently he traveled with an EPIC group all the way around the globe on a 21-day world-record setting trip. Daryl is survived by his three children and their spouses. Steve and Megan Ingalsbe of Dubuque, IA; Chris and Juli Ray, Jason and Beth Rytych, and their mother Linda Ingalsbe, all of Blair, NE. Grandchildren: Jackson, Maxwell, Halli, Isabelle, Quinn, Corwyn and Charlie. He is also survived by siblings: Ron Ingalsbe of Cozad, NE, Dave (Barb) Ingalsbe of Paynesville, MN, Margie Schaecher of Humphrey, NE, Mary Ann (Dennis) Pavlik of Osmond, NE, and many nieces and nephews. He was preceded in death by his parents, brother, Ray; in-laws, Arvey and Clara Pavlik; brother-in-laws: Charlie Schaecher and Jim Pavlik. The absolute lights of Daryl’s life were his 7 grandchildren. If you were in the room with Daryl and his grandkids, it was hard to tell who adored who the most. Looking back on Daryl’s 67 years of life, there are too many accomplishments to list, but if you asked him what his best accomplishment was, he would always say his family. Daryl was an army veteran and a lifetime supporter of the armed services. The family requests in lieu of flowers memorials be directed to a veterans organization of the donors choice in Daryl’s name.

Daryl Eugene Ingalsbe, 67 of Blair, lost his life in a plane crash in Florida on December 27th, 2016. Mass of Christian burial will be Saturday, January 7, 2017 at 10:00 AM at St. Francis Borgia Catholic Church with graveside services following... View Obituary & Service Information

The family of Daryl Eugene Ingalsbe created this Life Tributes page to make it easy to share your memories.

Daryl Eugene Ingalsbe, 67 of Blair, lost his life in a plane...

Send flowers to the Ingalsbe family.