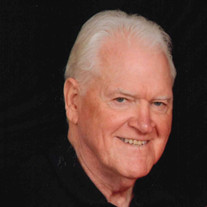 Darvid Quist, age 85 of Blair, NE, passed away September 27, 2021. Funeral services will be held Saturday, October 2 at 10:00 AM at First Lutheran Church in Blair. Military graveside services will follow in the Blair Cemetery. Open visitation will be held Friday, October 1 from 5 to 7 PM at Campbell Aman Funeral Home. The youngest of four children, Darvid was born on June 20, 1936, on the family farm in rural Blair, Nebraska, the son of Alfred and Clara Quist. He was a graduate of Blair High School and then attended Dana College, graduating in 1958 and then attended the University of Nebraska College of Law graduating in 1961. After law school, Darvid enlisted in the United States Army. Following his honorable discharge, he began practicing law with Haessler and Sullivan law firm in Wahoo in 1965. Darvid became a full time Congressional Staff member in both Lincoln and Washington DC. He was then appointed as a US Secretary of Agriculture Special Assistant. He continued in that position until leaving Washington DC in 1973. In January 1974, Darvid opened a solo practice in Blair, NE and was elected Washington County Attorney that same year. He was appointed District Judge of the Sixth Judicial District in December of 1980 and served in that capacity until June of 2010. He served on various committees for the District Judges Association. The Nebraska Supreme Court also named him to the Judicial Ethics Advisory Committee, which he chaired for eight years. Darvid was one of two nominees for Chief Justice in 1987, and was honored to be invited to hear cases with the Supreme Court on several occasions. On April 21, 1981, he was united in marriage to JoAnn Jacobson and to this union he accepted the role of father to Joel. Darvid enjoyed going to Joel’s sporting events, especially baseball and basketball, and prided himself on never missing a game. Later in life, he enjoyed attending Emma and Tanner’s activities. Darvid is survived by his wife JoAnn, son Joel, grandchildren: Emma and Tanner, along with several nieces, nephews, and a host of friends. He was preceded in death by his parents, and three siblings. Memorial may be directed to First Lutheran Church, Blair Fire and Rescue or the Jeanette Hunt Animal Shelter in Blair.

The family of Darvid Quist created this Life Tributes page to make it easy to share your memories.

Send flowers to the Quist family.