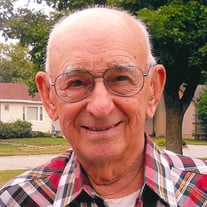 Darrell Chriss Kuhlmann age 88 of Herman, Nebraska died September 16, 2016 at his home near Herman. A memorial service will be held Wednesday, September 21, 2016 at 10:00 AM at Redeemer Lutheran Church in Hooper, Nebraska. Visitation will be held September 20, 2016 at Campbell Aman Funeral Home in Blair with family receiving friends from 6:00 to 8:00 PM. Darrell C. Kuhlmann was born on December 12, 1927 in Herman, Nebraska. The son of Chriss and Mary (Mengedoht) Kuhlmann. He was raised on the farm with his five sisters and attended New England School. He joined the United States Army in 1951, fought in the Korean War, and was honorably discharged in 1956. After his discharge from the Army he returned to the family farm. In 1952 he met Norma Liston at a dance in Arlington. The couple married on May 23, 1954 at Grace Lutheran Church in Hooper. The couple farmed and raised their children. Darrell retired after his son took over the farm. Darrell enjoyed woodworking but was once and always a farmer. He was a member of the Redeemer Lutheran Church in Hooper and the Herman American Legion. Darrell is survived by his wife of 62 years Norma Kuhlmann; children Lon Kuhlmann of Herman, Tim (Liz) Kuhlmann of Costa Mesa, California, Lori Kuhlmann of Omaha, Lisa (Mike) McCarty of Omaha; Grandchildren Maggie (Karel) Capek, Becca Kuhlmann, Joshua (Alexandra), Jonathan, James, and Jacob Kuhlmann, Jen, Justine and Grant McCarty; and many beloved nieces and nephews. He was preceded in death by his parents, five sisters and one infant brother. Memorials may be directed to Redeemer Lutheran Church in Hooper, NE in Darrell’s name.

Darrell Chriss Kuhlmann age 88 of Herman, Nebraska died September 16, 2016 at his home near Herman. A memorial service will be held Wednesday, September 21, 2016 at 10:00 AM at Redeemer Lutheran Church in Hooper, Nebraska. Visitation will be... View Obituary & Service Information

The family of Darrell Chriss Kuhlmann created this Life Tributes page to make it easy to share your memories.

Send flowers to the Kuhlmann family.